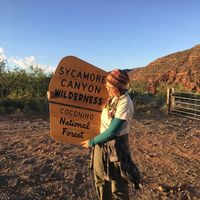 Right now I'm trying to have genuine interactions with other people in all aspects of my life. (My success with this varies.)

I love traveling, and I try to center my experiences around nature and human interaction, not mindless consumption. I find that when I travel this way (WWOOFing, hitchhiking, trekking, camping, couchsurfing, dumpster diving, etc) it is much more rewarding.

I really resent the commercialization of couchsurfing. I'm on Trustroots and BeWelcome (same username), which I think are much more ethical platforms.

Some of my all time favorite works of fiction include:
Bastard out of Carolina, Their Eyes Were Watching God, Bless Me Ultima, Woman on the Edge of Time, Aquamarine, A Map of Home, The Miseducation of Cameron Post, Roots, The Bean Trees, Ender's Game series, Harry Potter series, The Unbearable Lightness of Being

I spent over a year of my life working with people who have developmental disabilities, which changed many of my perspectives.

I've also hitchhiked alone quite extensively, which I was frightened to do at first.

I recently spent a month at the Oceti Sakowin camp near Standing Rock. It was a radical and profound experience to put into practice the ideas nonviolent civil disobedience and weaponizing white privilege.