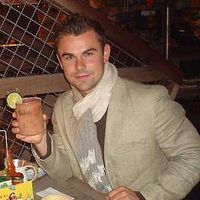 To Live In The Moment...

Originally from Germany, came to the United States when I was very young. I love to know other people and feel I can learn something from everyone.

Recent events have led me to re-prioritize my life. I left my position as a Financial Planner at Morgan Stanley Smith Barney a month ago. Currently I am working to finish my MBA. After that I am planning to take almost a year long sabbatical for a Round-the-World trip.

Other than the boring stuff I just listed... I love Triathlon, music, art, performing arts,etc. People close to me say I have a "golden retriever" personality...I guess this means I am up for anything and love to have fun...Ball?!? Play?!?

It is not the critic who counts; not the man who points out how the strong man stumbles, or where the doer of deeds could have done them better. The credit belongs to the man who is actually in the arena, whose face is marred by dust and sweat and blood; who strives valiantly; who errs, who comes short again and again, because there is no effort without error and shortcoming; but who does actually strive to do the deeds; who knows great enthusiasms, the great devotions; who spends himself in a worthy cause; who at the best knows in the end the triumph of high achievement, and who at the worst, if he fails, at least fails while daring greatly, so that his place shall never be with those cold and timid souls who neither know victory nor defeat...

Brand new to this idea... My home is not a hotel but is for friends....You are welcome ;)

Books: The Bible, C. S. Lewis, Freakonomics, Paulo Coelho, Victor Hugo, Alexander Dumas, The Economist, And Almost Anything I Can Get My Hands On...

- Lived with the indigenous in La Guajira Desert...South America's Northernmost Point.
- Traveled on a commercial barge through the Amazon from Ecuador to Peru.
- Climbed Mt. Cotopaxi...Closest Point To The Sun On Earth.
- and much more...check out my adventures www.BoundlessTraveler.com