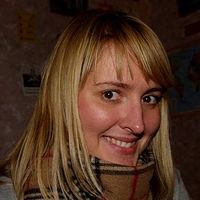 Now: I work in the sphere of education abroad and am based in the very South of Russia (the weather is hot here!), I still travel 5-6 times a year.

I wish I could just sum up my entire essense in one sentence. Um, no, I actually I don't. Because people change, they evolve. Hopefully. ;) And while today I might feel like conquering the world, tomorrow I might want to just sit back and observe without getting involved, etc. I'd have to say I go with (my own personal) flow.

I hosted, have been hosted by and went out with the most amazing people so far, I made a few friends, too! I think I bonded with most people that I couchsurfed with and I can only thank this community for the diversity and fun it has brought to my life. However, I do get frustrated (as I'm sure many other members do as well) when people simply do not reply to requests or messages, I think it undermines the community - even a simple no would suffice. I think CS is built on mutual respect and trust, so I think by non-replying you disrespect your fellow travelers.

I fully support the idea that CS isn't about getting something for free (although saving money is part of it in a way), but about meeting random - at first sight - people, connecting with them, sharing experiences and thoughts.

I like writing, I like reading somebody else's writing. Documentaries. In general I'm a big movie buff. I was thrilled to be in Berlin during the Berlinale. Mostly I like independent movies. Obviously I also have a passion for traveling, but that more or less goes without saying, eh?

Some of my favorite films are: Non ti Muovere, Nathalie..., La Pianiste, Nachbarinnen.

Two favorite writers: Stephen Fry and Michael Cunningham. Fry sometimes gets away with most insane and hilarious things while Cunningham's way of putting words enchants me.