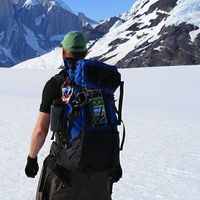 To listen to as much travel stories as possible. But... In the end.... Travel those stories myself ofcourse

Hi!!!We're Roel, Stefanie, Brent &amp; Fé (35 and 30, 2 &amp; a couple of months) We're living in Deventer, the most beautiful city in the Netherlands.My name (Roel), is pronounced with a rolling R. But since 99% of the worlds inhabitants don't know how to get a rolling R out of there throats, the Spanish equivalent of mi nombre will do. And that is Raoul. For those who want to stick to the name my parents gave me, the spelling pronunciation would be something like: Ruwl. Have fun!Anyway, me and my wife were born and raised in Deventer, which is one of the oldest cities in the Netherlands. Back in Medieval times it was a thriving port town and one of the most important Dutch Hanzeatic cities. But than things changed and now it's a comfortable little town with a beautiful ancient inner-city and lots of nice festivals to visit.Traveling is our greatest passion. I (Roel) started traveling ten years ago when I went to Oz. Soon southern South America and Tanzania followed. And then southern South America again, and again, and again. Although I didn't visit nearly 5 percent of the whole world, I doubt that there's a place as beautiful, pristine and tranquilly as Patagonia. So I will go back there for sure. (I have to, because I munched on Calafate berries).I (Stefanie) travelled Patagonia. I munched on Calafete berries as well, but I'm eager to travel more and more!!Back home I (Roel) work as a freelance journalist. Trying to get myself into travel journalism. But that's what all my colleagues want. I (Stefanie) am a psychologist working in Human Resources.

Widen your horizons, for there are many cultures to explore.

Providing a save haven for all those that want to explore our beautiful city!!

I've slept on a zillion couches in a zillion places, but none via CS. (I'm one of those brotherly kind of guys that never get's to sleep in the bed, always on the couch:))

Writing, Music (All sorts, but techno, especially minimal, is one of my faves. Like Richie Hawtin and Magda.)

Love Irvine Welsh. Hilarious. For the rest I will read anything.

After three visits to Argentina I call myself a somewhat Argentina specialist. Especially for questions concerning Patagonia you'r more than welcome!