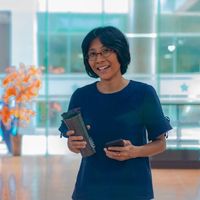 CURRENT MISSION
To be merciful day by day.

ABOUT ME
A person who wants to listen, look, and live.

PHILOSOPHY
(Corinthians 9:22b-23)
"So I become all things to all men, that I may save some of them by whatever means are possible. All this I do for the good tiding's sake, in order to share in its blessings."

HOW I PARTICIPATE IN COUCHSURFING
To invite my friends for joining CS project, to be a good host for CSers, surf with CSers, learn &amp; spread CS mission.

COUCHSURFING EXPERIENCE
Before joining CS:
August 2009 hosted Airlangga in my home. I have a very easy going guest that I really appreciated.
June 2010 being hosted by Tsukidjo's family. This family is very kind in serving me as their guest. They helped me a lot when I took holiday to Jakarta (Indonesia) and Bandung (Indonesia). This memory keep running on my mind. I just wanna do it for fellow couchrsurfers.

FEBRUARY 2011:
Traveled together with Monita &amp; Nadia (CSers LAWANG/MALANG) and also Calvin (CSer from GERMANY).
Hosted Calvin (CSer GERMANY). This is my 1st chance to be a host, so surprised! My friends who are not CSers members was very kind to meet &amp; travel with Calvin.

MARCH 2011:
Hosted Julio (CSer MEXICO) for 3 days. My friends helped me as well, once again they was very good hosts to company Julio in farms. My 2nd chance to be a host, very great!
Meet up with Ardita (CSer BLITAR) in gazebo 2 times on 2 days, have lots of fun because he's so funny!
Meet up with Marita (CSer MALANG), Elsy (CSer MEXICO), Julien &amp; Flora (CSers FRANCE) in Wisata Jamur (Mushroom resto), then company them to the station. A short chance, but so glad to be with them.
Meet up with Eko, Clareta &amp; Manik (CSers BLITAR) in Padaganan cafe. Nice!
Hosted David (CSer USA). This is my 3rd chance to be a host. It's really good!

MAY 2011:
Meet up with Eko, Galuh, Clareta, Manik &amp; Paulus (CSers BLITAR) and Alex &amp; Vera (CSers RUSSIA) in Wisata Jamur.
Meet up with Senjaya (CSer SURABAYA), Maciek (CSer POLAND) and many of CS members on BBQ party. Nice!
Travelled together with Fredy (CSer SURABAYA), had fun during enjoy Purnama Seruling Penataran.
Hosted Anton Krotov (CSer RUSSIA). My 4th chance to be a host. It's an honor for me to have him on my modestly couch.

SEPTEMBER 2011:
Meet up with Alid (CSer JOMBANG). He's nice &amp; simple. We are still friend until now, although he is a famous figure in my country :D

JUNE 2017
For the first time there is a meet up for CS member from Blitar. I met Clareta, Cipit, Den, Rahman.

Diversity of the Earth and beauty of life

Teach: to be happy and merciful
Learn: give thanks for everything
Share: love, smile, experiences