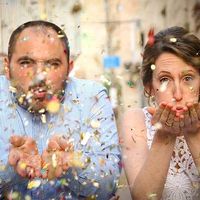 Don't regret the things I've done but those I did not do.. and live happily ever after

Zohar- Finished school, did a year of voluntary service in Jaffa, been 3.5 years in the military (compulsory), volunteered in the Ugandan Red Cross, traveled Uganda and Tanzania, USA, Guatemala and Mexico. worked with kids in California to save some money for university and for a cycling trip planning to cycle from Spain to Israel!(5251KM from Bilbao, Spain To Jerusalem- wasn't so hard!), traveled for a few days in Jordan and then off to China. Back to Jerusalem to start university majoring Education, Met Taly in University . Returned from guiding a summercamp in Russia and cycling Frankfurt &gt; Luxemburg &gt; Belgium &gt; Netherlands &gt; Frankfurt CSing all the way! Spent a cool summer (their winter!) in Australia for some Youth work and then off to discover how CS is done in India! Back in Jerusalem, back to my parents, but with Taly. Worked in a high school, worked for a short week (but did manage to CS!) in Ethiopia for "the Jewish Agency for Israel" and now living in NYC as director of one of their educational programs in North America. Proposed to Taly in a Hot Air Balloon in Costa Rica :) Married in NYC! Married again in Israel!! Joined our CS profiles :)

Taly- Finished school, been 2 years in the military as a teacher in needed communities, Worked in a Kibbutz to save up for the grand after army trip in Australia, New-Zeland and Thailand. Moved to Jerusalem for university, Met Zohar and wrote his papers :) worked with youth in a local community center and did my first CS in India! Looking forward to spend our next two years together in New York City as a student at NYU school of education. Got a diamond ring form Zohar in a Hot Air Balloon in Costa Rica :) Married in NYC! Married again in Israel!! Joined our CS profiles :)

Zohar and Taly- Found our new home in Jerusalem! Got an ugly dog and named her 'Yaftchuk' short for beautiful in Hebrew. Living the dream :)

Cycling Spain to Israel with Amit Zamir:
Surfed in Spain with Maricruz and Gorka July 1st 08
Surfed in France with Benjamine
Surfed in Italy with Marzio and Silvia
Surfed in Greece with Giannis
Surfed in Cyprus with Marnix

Had lunch in Tel-Aviv with Ece from Turkey
Hosted Sofia from Greece
Had lunch in Jerusalem with Elisabeth from Belgium
Surfed in Hong Kong with Paul
Surfed in Hong Kong with Sidharth (who was in Beijing!)
Surfed in Beijing with Zico
Hosted Clay &amp; Neti from California
Went to a concert in Jerusalem with Bob from Amman
Hosted Gaelle &amp; Marion from Paris
Hosted a New-Years Eve party attended by Tomer, Noam, Guy, Tamara and Amit
Hosted Rebbeca and Ryan from Wisconsin
Hosted Dan and Adam from Minnesota
Hosted Erez from Canada
Hosted Aiste, Mantautas, Martyna &amp; 3 of their friends from Lithuania.
Gave my oven to Noam who gave me two beers for it!
Hosted Saima from China
Hosted Cara, Sam and Zoie requested by Rachelle, Cara's mom :)
Hosted Magdalena from Germany and while here we had dinner attended by Sria
Surfed together with Robert in Jordan at Zahra's
Hosted Donata from Germany
Orgenized The CS Mishloch Manot Initiative 2009 which had 65 CSers, from 12 countrys, 4 continents and 120 packages sent world wide!
Cycled with Ben around Jerusalem on a folding bicycle
Hosted Claudia from Switzerland
Met Margarita in Jerusalem- she rents at my cousins!
Hosted Benjamine from USA and two of his friends from Poland and South Africa
Hosted Debora and two of her friends from USA
Hosted Hanna and Jakob from Germany
Hosted Benjamin and Emeline from France
Met Rachelle and Fred when they were surfing at my parents
Delivered a Mishloach Manot from Rim in Tunisia to Lara in Israel
Hosted JY from Korea
Hosted Riccardo &amp; Valentina from Italy and Mollly from US at my B-Day campfire.
Surfed with Lital in Moscow at Victoria the great
Hosted Ricardo the Italyian from Berlin
Hosted Anne from Berlin

MOVED BACK TO JERUSALEM
Met Pablo in Treasure Beach, Jamaica and traveled together to the magnificent Pelican Bar!
When to a Mexican bar in Manila with Anthony- the coolest Philippinos in the world!
Hosted Ruthy &amp; Bob in Jerusalem
Surfed Cedrics trailer-couch in Hinesburg, Vermont USA
Hosted Aurieli from France who made us a great cake
Surfed in Mahanayim (in Israel!) with Yukino and Nimrod
Surfed in Zurich with Dana and Sam
Surfed in Helsinki with Jimmy Kaaya
Hosted Ben and Gail (we met through CS 8 years ago!) with their daughter Shira and her friend Patrick
Hosted Dana and Sam who hosted us in Zurich!

lion king, the game, princes bride, they call me sam