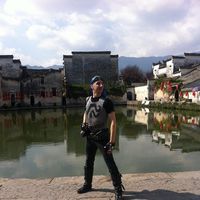 I'm a wandering fashion designer by trade, and I travel the country selling heavy metal-inspired clothing. It's a pretty grand job.
Besides that, I'm really into martial arts (Brazilian Jiujitsu and HEMA), cycling, tabletop roleplaying games, comics, anime, and all that good nerd stuff. I studied Chinese literature and the University of Michigan, and still occasionally audit classes just for fun.

I travel a lot, going from city to city selling my badass metal clothing. A lot of times, I couchsurf while I'm there.
I also enjoy hosting surfers when I have the space to do so, and help out fellow adventurers on the road.
As of August 1 2017, I'll be cycling across the Netherlands on a grand adventure.

I'm very into martial arts and physical fitness, and also into video games, comics, anime, and all that good ol' fashioned nerd stuff. And of course, my primary passion is clothing.

As you can probably guess, I'm pretty into heavy metal, especially stuff on the more prog/power/folk side of the metal spectrum.
I think Dune is the actual Great American Novel.
I majored in medieval Chinese literature in college, and as a result, I'm pretty big into that stuff. :P

I once got into a sword fight on a rooftop in Hong Kong.
I know how incredibly made up that sounds, but it's true! I even have the video to prove it:
https://www.youtube.com/watch?v=RTQfrTE2YFQ

I've got a fair knowledge of martial arts (Karate, BJJ, Muay Thai, Judo, Sambo....) that I'm always willing to teach. I speak a couple of dead Asian languages (literary Chinese and Manchu), which is fairly close to about as esoteric as knowledge gets. I do a lot of leatherworking and metalworking for my clothing stuff.

I'm always happy to share tales from the road; I feel like working outside of the normal institutions of capitalism have given me a unique insight on life and economy.