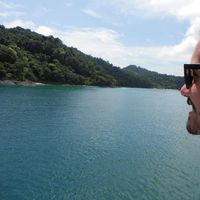 I am a very trustworthy and openminded person, one to do everything with, I like discussing and sharing things with other people, meeting new and interesting people, at the beginning I'm a bit conserved, after a few converstations it's all set though.

Late 2012 I travelled trough the US for 3 months with my 2 best friends and after that I immediately moved to Graz with them.
I didn't do very much this year but in September I'll start studying radiological technology at the University of applied science in Graz.

try to be myself and not change for anyone, trying to get to know a lot of the diffenrent cultures and lifestyles in the world and expand my horizon

Surfin' and when I got my own flat - hosting as well

I spent 3 months in the US with my 2 best friends - only couchsurfing - and we've never been disappointed!
it's so incredible how many generous, kind and awesome people are out there

Love Travelling, though I'm not experienced yet and still want to see the whole world.
I'm a videogamer since I can remember, Sports like ping pong or volleyball (I'm a bit careful though since i injured my shoulder)
recently started biking - race bike though, mountains must wait a few years ;)

lord of the rings - books and movies
game of thrones - song of ice and fire
star wars -
There are so many movies out there I love, e.g. District 9, Drive, Batman, the Lion King, Memento,..

I love Drum'n'bass, all types of psychedelic trance stuff and in general electronical music.
I'm also a heavy metal / rock fan like Volbeat, Rammstein, Machinehead, but over the last few years I grew for fond for epic music (with a lot of orchestra and choir) - also some of the movie soundtracks out there are just incredible (Game of Thrones soundtrack is amazing)

Best show I've seen though was Serj Tankian with orchestra in the "Brucknerhaus" in Linz, gave me the shivers

-white beach, sun and blue sea in Thailand - like "The Beach"-movie
-awesome national parks in the US
-driving 50 mph with a bike