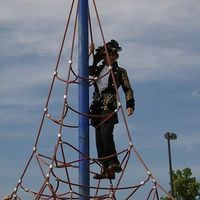 I love Iceland and I want to go back.

I'm on a continuous search for happiness. This generally involves adventure and/or physical activity and/or a greased up watermelon in a lake. I run a lot. I also run. Sometimes I bike or spend time in the water trying not to drown. One day I'll be good enough to call this act swimming, but not yet.

I also like to spin poi! (Although I haven't been practicing much recently)

I tend to go in one of two directions in life: skyward and pieward.

Life motto #1: Everything always works out
Life motto #2: It's better to die trying than to try dying

I surf when I travel, and host people when I don't. I try to make it to the CS meetups when I can.

My first big CS experience was Skyward April Adventures - which was exactly what it sounds like, with some fire added. Literally.

Couchsurfing made my fantastic trip in Iceland even more fantastic!

I've also hosted some number of surfers, and have been to a number of local CS events.

The number of books I've read (all the way through) for pleasure can probably be counted on one hand. Maybe even one finger. Not exaggerating. Seriously.

Music - mostly alternative rock (or punk rock, I don't know what the difference is), and a lot of video game remixes which I think would be classified as electronic music.

"It's impossible" said pride.
"It's risky" said experience.
"It's pointless" said reason.
"Give it a try"... whispered the heart.