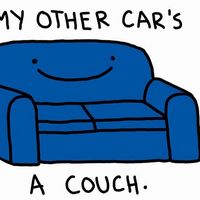 Be happy, meet positive people, experience LOTS of fantastic things! (Though, with the PhD, it's more like 'keep head above water'.)

I have a lot of geek interests (computers, books, games) and non-geek interests, too (spirituality, civil liberties, animals, films and filmmaking, hiking, camping, Burning Man, media, social justice). I don't smoke or do drugs, and don't have kids (other than critters).

...And I enjoy swearing. If you have delicate ears, meander elsewhere, lest my foul mouth wilt your flowers! (I can shut it off, but in my own home, I prefer to speak freely. ;)

"If a man be gracious to strangers, it shows that he is a citizen of the world, and his heart is no island, cut off from other islands, but a continent that joins them."

''Perhaps travel cannot prevent bigotry, but by demonstrating that all peoples cry, laugh, eat, worry, and die, it can introduce the idea that if we try and understand each other, we may even become friends.''

Traveled in Europe, met with a couple of other couch surfers for camping, hiking, and picnicking in Sicily. When I moved to Napoli, I met and toured a bit with visitors. Also took weekend trips to various European cities, where I met and sometimes surfed with other CS-ers. I attended the occasional CS gathering when I lived in Napoli.

I have met some incredibly interesting, adventurous, and hospitable people. Always interesting stories to listen to when it comes to CS folks!

Worked on feature films; completed US Marine Corps bootcamp; self-financed and arranged a solo trip to Burning Man; hiked Mt. Etna in Sicily; went on safari in Tanzania -- snorkeling off Unguja and Pemba, too. Besides joining the Marine Corps, camping on Mt. Etna was the craziest, most amazing, intense thing I've ever done.

I can teach you the basics of internet usage, email setup, and computer repair and maintenance. I imagine if you are using this site, however, you are already comfortable with the basics. ;) Happy to show you how to register a domain and get basic hosting, if you want a website. Can even show you some basic HTML for your first page.

With the blog, I learned a great deal about WordPress and social media. I can teach you about Facebook, Twitter, Reddit, etc. Just an intro, but enough to demystify it. :)