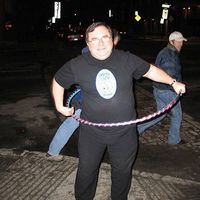 I'm part chameleon; I can be at ease with people in their 20's as with people in their 50's. I'm a fun guy if you push me a bit since I'm a bit introverted and feel more at ease to listen to conversations than to take an active part in them (unless you find a subject the realy interest me, then I'm hard to stop).

I love to travel but when I was young I only had money enough to hitchhike across Canada. Now that I have a bit more money to travel further I don't have time...

Nobody get out of life alive so don't worry about everything and bite in life as much as you can. You got only one chance at it, don't waste it.

Not very active, I rarely receive couchsurfing request as I'm older and not directly downtown. I go to CS meeting once in a while to keep in touch.

I just had about ten couchsurfers so far (one four times), and it was great!

I guess people think I will bore them to death by showing them a stamp colection or something similar that they think people my age love.

I surfed for the first time in mars 2008 in UK and it was great, even if I was sick and not at my best. In september 2010 I coushsufed again in Cairo, Egypt.

CS is the best way to know people in a foreing contry and to see how they live. A lot more interesting than staying in hotels.

Reading, photography, travels, fine beers (degustation, not to get drunk). Meet interesting people and have a nice evening with some friends. Learning new things and meeting new peoples. In short, living.

Books
I read all the times I can, in the subway, at the office during lunch if i'm alone, even while walking sometimes... I love fantasy and science fiction but read lots of different things.
Music
I love jazz, progressive rock, folk and world music but will listen to almost anything. Kind of music I can't listen for long before it gets on my nerve? Well, opera, western, disco and rap never seems to get my approval, techo will do the same after a while but I can stand it a a bit longer.
Movies
As for movies i can be 2 months without seeing one and will see 6 in the next few weeks. Just to name a few I loved: LOTR, Amélie Poulain, films by Stanley Kubrick, Shreek's movies... I can just enjoy a comedy for the sake of it and then watch a drama with lots of thing to think about but most time I just go for the recreation, not realy a film buff.

Breakfast in Prague, lunch in London, dinner in Paris, all on the same day!

Sunset over the great pyramids!

Seen U2 360 Concert in Montreal and 36 hours later was at the Montreux Jazz Festival to see Arcade Fire!

Life is a learnig process that I hope will go on untill my last breath!

I can teach a bit about beer, homebrewing and differences between the major beer styles but I'm still learning.