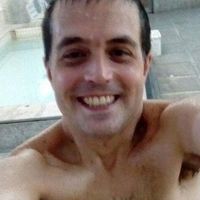 Age does not mind, necessarily, here in my culture, so please asiatic used to think that age make any difference, please here do not think in that way, and feel free to be my equal, my friend, my corrector when I am wrong, be who suggest a better idea than mine, and feel free to write to me! I am a man that really enjoy free unofficially turistic guide in BA autonomous city and Colonia del Sacramento in my free time, and if I can, even more cities or places. Now for example, I do not work fridays, saturdays, sundays, and I will take some holidays and I will make a trip without helping my parents to go out from their stressing way of life. I have many days of holidays each year, so they allways are enough for helping there and travel by myself, or guiding (or discovering with) someone. For me it is more interesting than doing exercise walking in circles always around the same place, or in a gym where other men never talk to me, like we were another machines there, robots, androids. And certainly than practicing languages is always welcome. I prefere guiding people who would remain more than a week in the city, to build a minimum human bond. Of course I know that those people remaining much time in the city, have time to know better another people, and I also know that there it exists always the risk that the affinity (as friends, or "brothers", or another kind of relation) could be greater than with me. So I am not offended if I am told about this. I think friendship is not about forcing anything. friendship.

When coming to Argentina something you need to know is that people think that freudian therapy (or similar, lacan therapy) is the same that therapy of psycology. Do not even know the difference. And what is worse, many parts of the theory it is more or less under the culture of almost all people in the country. Many make fun of the skinship (relationship with tactile affection) in friendship and between Korean blood brothers and it is disappearing.... But in psychology Marasmus is the death of well-nourished or malnourished children if they are not touched. As prone to evil as the flesh may be, the skin is so indispensable a means of spiritual love that, for traditional Catholics, Jesus Christ had to leave us his real and living Body, and just as there were Saints who ate nothing but consecrated hosts, the ideal It is that that is enough for affection, but it is still tempting God, throwing oneself, to lack something so necessary. Just as the child needs a paternal and maternal figure and both affections, so the adult needs masculine affections. What happens in Argentina is that Freudian reductionism is more inculturated, and it hasn't matured even in a hundred years of existence. With his hyper-rationalization he continues to create psychotic outbreaks and increase psychosis, although we are in a time when an ape is recognized by both the sexual instinct and the filial-maternal, the filial-paternal, that of mentorship, that of total visual inspection for group acceptance that allows fulfilling the role of the survival of the family itself, the gregarious instinct, etc. Freud not only did not open himself to such a basic range of instincts (PULSION = psychic representative of an instinct) but he assigns the same PULSION to the sexual instinct and to the maternal filial, as if the Oedipus disease of all the stained children of Adam and Eva did not have the PULSION of filial agape on the part of the other instinct. Today it is recognized in apes but not in humans. And because of the theme of Marasmus, the consequences of a young person are usually (including maternal coldness, although Koreans know that prejudice in their culture that cuts off the time of maternal affection in lactation or shortly after, with boys), throwing him into a increasingly premature sexual initiation (equivalent to pushing them to their own corruption) or premature recourse to even more mercenary love of prostitutes. When the mercenary aspect is emphasized a lot without sincere appreciation, a murderous hatred of women almost in general eventually arises, and this is produced by the Freudian theory and no patriarchy. By severing the source of brotherly affection from friends and brothers and vice versa, giving that brotherly affection to them wisely

I am forgetting my Italian, after a time I begin mixing it with brazilian Portuguese. I need some time practicing my Portuguese with you until remember most of it. Writing English is some easy for me but Oral English, if not slowly, strongly pronunced with open mouth, it is almost impossible for me, specially with letters very softly pronunced, like while breathing but in the moment of inhaling the air inside....or full of phrasal verbs, unknown accents, urban vocabulary, americanisms, and so on. I have all material to learn Korean (the most easy language) and French, but I never decide begining.

I can arrange a visit to the presidential government building "Casa Rosada" online (when the president is not inside working, of course), and once inside the building, there is a free guide, a state employee. I can be the guarantor of your conduct, if that is still necessary. There are many attractive places in the city: the rose gardens, with their "lakes" with birds, rowing boats, pedal boats, with its artificial island, with its platform for shows, with its Andalusian patio, with its white bridge of details of the "Belle Epoque", under which to cross with the boat, behind a row of ducklings following their mother. Nearby are the "forests" of Palermo, the Planetarium, the Tierra Santa Theme Park in Buenos Aires (with its Armenian, Hebrew, and pizza restaurants and so on) that require a whole day to visit, ideally two days. In the Recoleta cemetery there is the tomb of Evita Perón and many very artistic and impressive funerary monuments. We have Chinatowns and like two Koreatowns. I have no problem accompanying you to an "almost Korean jimjilbang", because to tell the truth, I am not a nudist, in the sense of the imposed hegemonic definition, but bro-nudist, brother-nudist (in the sense of the Kanji symbols for Hadaka not tsukiai, leaving all symbols of social difference, etc., also leaving the strong shell, to allow knowing the softness of the armored heart, its vulnerability). Unfortunately the Ajumma (Korean: 아줌마) is less shy about socializing with other women in those kinds of places. While on the male side, age barriers, and other imaginary barriers, still weigh heavily on shyness to socialize. Actually the city of Buenos Aires is absolutely endless to know.

I only do not accompany to anything about tango or places with too loud strong music that nobody is able to talk, nor to listen. Here people usually like to dance with no space among them like in the subteway, well, not allways so extremely, but sometimes similar. I would have no problem except that even women usually touched my ass, so it felt like an invation, wher no spiritual exchange is done, with or without words. Instead of tango, I prefere guiding to places where the same people that attend the place to eat, in some moment of night, in an spontaneous way begin to dance older traditional national dances. For the moment they do not allow dancing. I am worried because the most famous place where enjoy at the same time, traditional national foods, meals, and a show of these older traditional national dances and kinds of music and singing....clossed, and I do not know the reason. I hope it will return. One of these places, but it usually had not shows or people begining dancing by themselves, gets full of young people (almost all young) that sometimes touch guitar and sing spontaneously. It is a place with traditional food too.

I am interested in meeting people from diferent cultures and hang out with them.

The powerful force by which I can penetrate the spiritual world and return to it, not as a period, but as a personal habitual state...it is a set of experiences since very young age, being a little child, that made me see life as a Solomonic dream of full consciousness and responsibility, where the eternal beings are only human beings, demons, angels and the three flames that burned in a single fire in front of Moses, in a bush that was not consumed. My soul was diabolical but rebellious even against the devil, I refused to stop disappointing those pleasures, which on the edges of a glass of champagne, taste like honey, but deep down it tastes worse than absinthe mixed with gall . Fallen the curtain of life that is a dream, even without believing in the demons I experienced them, and without believing in God for sure, I experienced the angels. But there is no sensory perception, there is no hearing, no vision, because there is not even sound or anything to see, none to hallucinate, very simple, because there is no sensory sensation at all, there is not sound at all, there is not vision at all, and not even the soul feels. I will not say here or now, what only a person who lives it is capable of understanding a little.

Of course, the most amazing and beautiful thing is the traditional Catholic Mass, with several parts in the most sacred language: Latin, especially that Mass which is entirely sung. I do not attend any other kind of Mass.

Even if I cannot host at the moment, I could hang out as friend, for free (NOT give me money if you do not want offend me) If you want to enter into the place where our National President works, I can teach you how to make the reservation for a free guide inside it in English or in Spanish (paid by Government). It is made through the website of the Goverment. Folk dances and music usually are on fridays, saturdays.... Tango is not really the original traditional folk dance of all towns and parts of the country, and I do not like it much. But there are many other things to do too. There is a ship where you can eat while surrounding the city. This river is the widest in the Earth, you can understand it if you go the short travel to Colonia city in Uruguay Country (I am not sure about to going to Uruguay with you but it would be interesting for you). Also in Buenos Aires city there are the Woods of Palermo (named "Bosques de Palermo"), with the place with roses called Rosedal de Palermo and its tiny "lake" (Lago de Palermo). And the "Holly Land in Buenos Aires" thematic park in Palermo (Parque "Tierra Santa en Buenos Aires"), the Planetary (re-opened). There is an interesting big museum near the place where the President works. If you like very artistic churchs the "Basilica del Santísimo Sacramento" is amazing, and if you have cultural interest I attend to the same holly mass celebrated during 2 thousand years. Which kind of places or activities are you interested in?