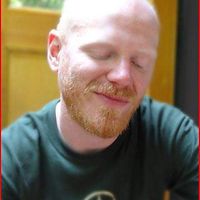 Capturing truth with my pen like fireflies in a jar. Riding the wild beast of my intuition and generating novelty with my magic wand.

If you ask about me, my friends might tell you I'm clever and inspiring, if a little awkward or grumpy sometimes. They might tell you I write good stories or good songs. I really just want the best for everyone. I always encourage you to follow your dreams.

I haven't been using the couchsurfing site until now, but all of my travel experience comes from couches and rideshares. I love meeting new folks.

I volunteered in New Orleans for a few months after Hurricane Katrina. We drove, so I saw hundreds of miles of devastated landscape before we even got there. I'd like to say that I'll never see anything like that ever again...

I watched an actual moose bathing for about thirty minutes up in Baxter State Park.

I watch the sunset ALL THE TIME. You'd think it would get boring.