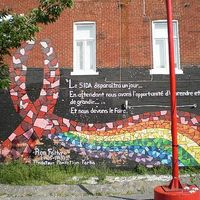 I am an "ancient" of CS, from the "good old days", before 2013 - when it was still a marvellous community and had not turned corporate yet. So, please, help me to make this spirit go on, or even revive it!

Love. Give love to people, be a comfort, a joy as much as I am able to be, for my contemporaries Discover the rich character of anyone Try to see and share the poetry of everything in our world And colour the universe !!!

People who barely know me would say smiling. Hopeful in life whatsoever.
Then talkative - don't be scared, I won't make you deaf. Open-minded, I try - "not kill the neighbour because his dog barks all the night long" -, and sensitive to anything - may it be the caress of the wind, the smell of a passer-by, a funny slip of the tongue in a serious talk...

'The world is a rose ; smell it and give it to your neighbour.' (Arabic proverb)

I hope I can help this wonderful initiative, for now, by hosting people, learn to know others, and talk about it among all my acquaintances. Soon, we will be connected to the whole world, and the network will extend to the stars and the planets !

* A great way to meet people when you're far away ! I got to know many wonderful people this way when I was in China.
* Positive hosting and unforgettable experiences also as a guest. I am always longing for new experiences ! Does a better way of travelling, discovering, sharing ever exist ?

* Foreigners, foreign cultures - brethren, though. If Babel had not been created, I would have built it by myself; what a chance to have so many cultures and languages, it would be a shame not to enjoy it.
Anthropology in general - what makes us, in spite of superficial differences, so much the same...

* Art in general. Great admirer of Andy Goldsworthy (Land Art), Lei Saito (a marvellous, delicate, poetic young culinary artist), Yayoi Kusama and Japanese poets. When I was younger I dreamt of inventing olfactory, or, better, multiple sense-calling works. I still try it with food... like the Japanese say: a dish must be as beautiful, as aesthetic to look at as delicious to eat; half of the pleasure comes from the eye. And if you add the enchanting smell and some nice cooking sounds, I think that we have it!

* Writing - as the most admirable Japanese writer Sôseki wrote it: "a painter who has not painted a single picture, a poet who has not written a single line, is richer than any of the trivial personalities of this world". Live out your poetry everyday, let you invade by the air and sensations around you, see the world in its everlasting beauty and you will always be a poet, an artist...
I sometimes write stories too, but I am not at my best with narrative.

* Dancing. I know, it is an art, but so peculiar. Alone, in a group, in a couple. Choreograph, make dances. Dancing is my way of doing art, and sometimes approach people...

* Nordic skiing. I hope that I will be able some day to do this famous race in France, more than 70 km!

* Every kind of cooking - all sensual smells, contacts, flavours, delicious views of food. Preparing and sharing, hm...
These past years, I have been mostly interested in turning traditionally salty dishes into pretend cakes or desserts; it's very funny!

- experimental music (such as Mathias Delplanque, from Nantes, Fr)

- reggae, ragga music and dancehall (Patrice, Admiral T, Bounty Killer, etc.) and reggaeton - a slightly "violent" music (when it does not harm or threaten anyone) which is a fantastic catharsis!

And of course every good film from all over the world (fiction and documentaries - love documentaries), such as :
"La sapienza" by Eugène Green (extremely peculiar in the direction of actors, but fantastic),
films by Pedro Almodovar (Spain),
Emir Kusturica (Balkans),
Lucrecia Martel (Argentina),
Hitchcock (Ah! "Rebecca"...),
Julio Medem (Spain),
"Viva la libertà" by Roberto Andò,
"La grande belleza" by Paolo Sorrentino,
"Children of Paradise" by Marcel Carné (one of the most beautiful film ever directed)...

* Recent ones: "The Handmaid's Tale",
"The State" (about ISIS - chilling),
"The young pope",
"Babylon Berlin"
"The marvelous Mrs. Maisel".

* "Dead like me" (US), unfortunately for only 2 seasons
* Metrosexuality! (UK, by Rikki Beadle Blair)
* The awesome, classical "Doctor Who"!!!
and TV series by Jenji Kohan (Orange is the new black, Weeds),
the great French series "Ainsi soient-ils" about seminarians and power struggles within the Catholic church;
the Danish "Borgen" (on politics) and "Arvingerne" (The Legacy);
also, the British, historical "Downton Abbey" and "Indian Summers",
and the harsh but great "Hatufim" (I have not seen the Americam version "Homeland"; after the Israeli series, I thought it might be difficult not to compare)
And of course, "Queer as folk" (for "there's nought so queer as folk" ;) and, to some extent as it is a bit too far from the reality of many lesbians, "The L Word" (both pioneers).

Briefly, about books (I read a lot too, but I must have lost you now):

* classic, sci-fi, historical, some detective novels (mostly Agatha Christie and Erlendur Indridason);
autobiographies and biographies;
poetry (I went to a poetry festival last year in Sète, a Mediterranean harbour in France, and it was marvellous);
theatre;
anthropology and sociology (Françoise Héritier for instance, recently Bob White and interculturality)

Ok, let's end it up face to face... and please make me discover new ones !

* Bathe in a guelta in the Sahara - a tiny natural pool, a waterhole in the desert - in a region with an annual rainfall of about 60 mm a year; and with a catholic priest who could play the bombardon !

* Risk my life while riding my bicycle in the terrible traffic of Guangzhou (China), between insane drivers, buses and bicyles coming in the opposite way but on the same side of the road - what an aventure every time !

* Suddenly discover a field of wild blueberries in Abitibi (QC, Canada) while having a long ramble on my bicycle

What can I teach ? How to make a great piperade (Basque country) or a croquembouche (French wedding pastry), maybe... For those fond of geology, I can create a whole delicious terrane in nougatine and biscuit !

For people fond of dancing, I can teach some basics of rock'n'roll, waltz, salsa, bachata and a lot of other couple dances... or even some oriental dance (belly dance or baladi), which I simply love.

I have also been said and proved to be a good teacher in many things; patient enough, I suppose: sciences, languages, anything I may know.

Oh, I am eager to learn knitting and real sewing. This way I would be "ready to be married" as a friend of mine says !

I can cook. It's actually often a wonderful way of spending time together and sharing our cultures; when I was in Cologne, we prepared a "French-German meal" with my host and his girlfriend: Frikadelle (sort of meatball), kohlrabi and a tarte Tatin (sort of upside down apple tart where apples were cooked in caramel before baking).

I am chatty :) enthusiastic, joyful and extremely curious. And do not worry, I will help you with anything you need, at home or somewhere else.