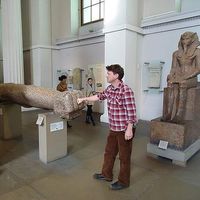 I love to travel. I live for it. And I love meeting people, too. Especially when travelling. Which makes couchsurfing great for me.

I want to host people in Toronto! I have surfed all over North America. It's time to throw back some of the karma.

I also love the road trip and ridesharing, carpooling, covoiturage ... there should be a "ridesurfing" site! And I am known around these parts as "the roadtrip guy." I had nothing to do with this nickname ... except the roadtrip part ... I will head out for no particular reason other than being able to.
I run a travel related business. http://HitTheRoad.ca - but it's still a work in progress. If you're looking for a road trip - check it out! See the roadtrip section of my photos.

Share the ride. yeah. that's all i got right now. when i was a university student i was really into french and german philosophy. but then i went through a jaded patch. now i couch surf. forget theory. i want action.

I am excited about doing more to help this incredible online community / resource. I really want to help out communities that as of yet don't have an active CS group. If you are a newcomer to CS and don't have many fellow surfers in your town, then talk to me! Maybe I can help you there....

I am participating by couchsurfing my way across North America. Soon to be in a town near you. Or on a couch near you .... I'm not actually travelling across North America. I'm more randomly dropping in on disparate locations ... I bought this increadible Air Canada flight pass ... unlimited air travel, three days/week for two months. Not bad, eh? &lt; That is a little outdated now ... my flight pass is finished. But the roadtrippin' carries ever onward....

I have been lucky enough to couchsurf a fair bit over the past few months. Couchsurfing restores your faith in humanity. You get to meet the most wonderful people. And truely interact with them.

SOUTH AMERICA! I was recently travelling Peru and Bolivia. I want to get back there soon.

Roadtrips! Apparently, I have come to be known as the roadtrip guy in these parts. I must admit, it's well suited....

I am presently in the development stage of a fair trade clothing company. Almost every job I have ever had has been with a not-for-profit organization. So this is a bit of a change for me.
Also ... Travel, language, politics, fairtrade, cycling, www.hittheroad.ca
I really need to update this.

I just saw The Revolution Will Not Be Televised, a documentary about Hugo Chavez, President of Venezuela and the attempted coup to overthrow him. It was INCREDIBLE!

The salt flats of Bolivia last spring were inspiring. I was president of my student union in university. Once in the same soccer arena with Fidel Castro. Bought a beautiful vintage Italian bicycle in Milan and biked the lake district.

Wanna know how to travel for free? talk to me....