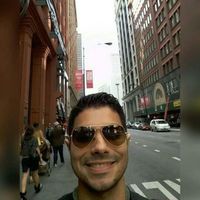 My name is Davis Ureña and I am a 25 year old panamanian. I was a Fulbright scholar in the U.S. from 2015 to 2017 and came back to Panama mid 2017 to work in the Renewable Energy industry. I like to paint, cook and tinker in the house. I've got the knack to fix stuff in the households too. Throughout my fulbright scholarship I learned that traveling and knowing different cultures is one of the most rich experiences you could ever get.

I am on couchsurfing because I thought it was a good way to be able to afford traveling while getting out of my comfort zone and be able to share my culture and my pride of being latino and panamanian. Additionally, I think people that would be in the same situation traveling to central america would like to have welcoming people that can share a couch while getting to know the city.

I'm interested in engineering, sustainability, renewable energies and environmental issues. I am also a fan of good music and dancing. I am well aware of political issues and I love to discuss them, as well as social issues. Anything that has to do with science, count me in.

I listen to jazz, reggae, hip hop, rock, metal, pop. Basically anything . Movies I like are comedies (such as Steve Carrell's), thrillers, dramas, and specially mind teasers (Shutter Island, Interstelar, Inception). As for books, I actually prefer to read scientific magazines, wikipedia, and anything that adds up to my knowledge. I also like game of thrones.

I traveled the whole west coast by myself for 30 days on budget. In hostals, couchsurfing, and airbnb. It was like a euro trip; but in the U.S.

Definitely share my experience when I went to the U.S., share a beer and/liqour (my treat) as well as a Latin dish (my treat again). Last time i went to the store and bought some sweet plantains with rice and coconut and prepared it right there in the kitchen for dinner.
I can teach you how to paint in canvas if you would like. I can share with you some of latin dances and maybe you could learn how to dance salsa and merengue.