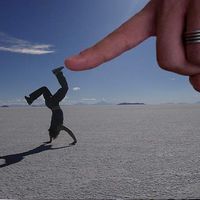 well, i guess, everyone is somehow special, has different characteristics or special talents. therefore i claim to be special too.
why?
i belong to a world wide group of no more than 500.000.000 lefties and i come from a town called Prutz - both can be googled (wikipedia helps)
this means, i learned to open a can with a right-hander tool and i can speak such a strong accent that even Austrians have problems to understand.
doesn't this sound special enough?

i signed up for CS the first time in the beginning of February 2005, unluckily my profile got lost and I used HC and CS at the same time. For me both projects incorporated the same spirit and i fell in love at first sight.
I've been volunteering for HC as a city ambassador of Innsbruck and set up meetings for CS and HC together with other local volunteers in Innsbruck.
In 2007 I've started to volunteer as a CS Greeter and became a Nomadic Ambassador and thus my main mission is to spread the CS vision all over the world.

In the time starting from May 2006 until December 2006 I hosted more than about 30 people, from more than 10 countries. I hosted couples, singles, business men and travelers, I didn't care and had incredible experiences and now loads of stories to share. just remembering avi, my very first guest, who composed the "wo ist mein a...loch" song and sang it in front of the "golden roof", Innsbrucks main sight ... i was rolling on the floor.
My possibilities to travel were quite little due to my studies until lately starting January 07. Before this time I was hosted once in Madrid, but then my time of traveling had come.
I started my trip to South America and was hosted in ...
Atlanta with Elliot (HC), Buenos Aires with Julieta (HC), Puerto Madryn with Walter and Mauricio(HC), Ushuaia with Raul (HC), Mendoza with Diego (HC), Santiago de Chile with Henrika (HC), Buenos Aires with Camila (HC&amp;CS), Santa Fe with Martin, Pablo (HC), Lima with Felix (HC&amp;CS) and some of my best friends I met in CS meetings, especially in Rosario where I was living ... i can't thank enough for all that great personalities i met there

... and now, for the moment my hugest project was London, October - November 07, 5 weeks of couch surfing ... stayed with ...
Colin (CS), Rene (CS), in my office (nothing, but a comfortable couch), Davina (CS)Alain (CS), Pete (CS) my boss (comfortable couch again, no connection to CS ... yet)
... again, thank you so much for everything, you all, including the people I met throughout all the meetings, the ManCS organizers and participants, everyone, created a simply great time here in England for me

update february08:
I've been living in France now for almost two month and just returned from the Netherlands and Belgium, but before I also had quite a few surfing experiences this year - actually i surfed more nights than sleeping in my own bed so far.
I was hosted in France:
in Paris by soraya, in Reims by Kilian, in Lille by Jeremy, in Lille by Antoine
I attended CS NYE in Paris, helped in the organization of the first Reims meeting of the year and was at a meeting in Lille.
... and I hosted Antoine in Reims ...
I surfed in the Netherlands:
Ludmilla and Davids couch in Amsterdam (+ one CS meeting)
Liza and Jaspers couch in Utrecht (+ 1 CS meeting)
Victors couch in Rotterdam
I surfed in Belgium:
Sara and Toms couch in Brussels
Lucas couch in Antwerp
Wims couch in Brugge
Barts couch in Gent

update: April08
- finally I got the chance to host again, Tere and Ivan from Bulgaria stayed at my place for two nights
- and a week later I hosted Georgie (Leicester, UK), Paolo (Trento, Italy) and Bruno (Den Haag, Holland) ... great weekend again ...

update some time in 2011/2012:
I had the chance to host a lot of people in the meantime and also do some more surfing. Settling down in Innsbruck for a little while gave me a chance to do that, now on the road again.

this and that. as long as it's fast or slow, long or short, hot or cold, loud or silent ... basically anything which is worth spending a second thought on it.

too little time to watch, listen and read, but always curious enough for new and old stuff.