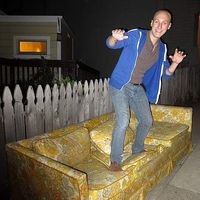 To become the best husband and father that I can be and enjoy my life in Vancouver.

To explore strange new worlds, to seek out new life and new civilizations, to boldly go where no man has gone before.

I've been told I'm a very laid back person with a good sense of humor. My direction in life changed drastically when I started traveling in 2011, once I had the time to define what success meant to me.

My first real travel was in 2008 to China with a coworker. Then in 2011 I decided to sell everything and travel the world. The plan was for a year originally but by the end it was 4 months shy of 2 years. By then I was out of money and it was a good time for a visit home anyway.

I went back to Canada for 10 months before in September (2013) continuing on with my travels, living in San Francisco for 5 months then Medellin for 3 months. Then throughout South America and back home in September (2014), 1 year after leaving. Then 3 weeks after coming home I went back to Chile where I lived for 6 months with my now wife. Since then we moved to Vancouver together where I'm working as a programmer and we have an 11 month old daughter named Juliette.

Hosted 13 surfers and surfed with 44 hosts in 25 countries.

- Eating a magic mushroom pizza in Vang Vieng that woke me up to some realities of my life and the nature of my consciousness. Also opened my mind to the power of psychedelics and the positive effects they can have on my life. In moderation.

- Moving to Santiago for a girl I had known for 2 months and only spent 10 days with. She is now my wife and the love of my life.

- Traveling to 50 countries over a period of 32 months on a budget of $40,000 CAD. The experience showed me that I was correct to believe that I could do it and that I had the drive, smarts and desire to achieve this goal.

- Living and working in Kuala Lumpur, Perth, San Francisco, Medellin &amp; Santiago. The experience showed me I have the skills to survive and prosper in many different circumstances.

- Meeting 100's of great people who I now call friends and who I will always share that moment in time. Friends aren't people you've known for years, they are people you connect with and share good experiences. And with this realization I now have friends all over the world, some I've known for years now, others for only a few days.