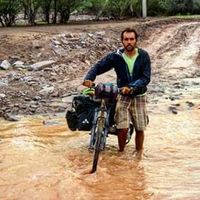 2019 Moving to Poland
2018 Israel, Palestine and Jordan. Tenerife, Ibiza, UK, Italy, Austria, Czech Republic and Poland.
Soon: Backpacking México, Belize, Guatemala, Colombia, Ecuador, Peru and Bolivia.
2017, expedition by bicycle to Scotland and Tunisia.
2016, I rode From Bilbao to Malaysia by bicycle, I came back in November after my bicycle was stolen.

I heard about Couchsurfing in 2005 and my first participate was in 2010.

I don't like describe myself, but I see me as a little bit shy on the beginning, adventurer, curious and calm person.

I like aviation and earned my single engine planes licence in 2007.
Currently spend my time finishing my studies of Geography at the University and some part time works.

In 2015 I did a long bike touring trip during spring, from Hendaye to Turkey where, I combined low budget travel with sport. I discovered cycling-travelling in 2011 and think is the best way to get involved in a really amazing travel. Recently, I just finished my longest trip: from february to november 2016. I cycled from Bilbao to Malaysia... I supposed to arrive Singapore, but I came back earlier when my bicycle and all belongings were stolen in Malaysia.

Today is the day in which you are older, but also the one that you will be younger (me).

"Do not go where the path may lead, go instead where there is no path and leave a trail". R.W. Emerson.

I don´t have big experience but I hosted some people and It was a nice experience share my free time with couchsurfers. Offering not only a place to sleep, but increasing the knowledge of different cultures and languages.
Also, I surfed a few couchs and I would like to increase that, mostly to know the best places, which are not always the most tourist.
Have the guide from locals is always a great way of travelling.
I'm using CS for my travels by bicycle, in summer 2014 from Bordeaux to North Cape in Norway, in 2015 to Turkey and in 2016 till Malaysia.

Sleep in the beach.