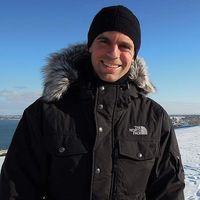 Born in Granby (Quebec, Canada) where I lived until 1995. 3 year for a Actuarial Mathematics diploma at Quebec City and a way brought me at Paris in summer 98. Initially went there for traveling, I started to work there a month and half after my arrival.

I stayed in Paris for 13 years and come back in the region I grow up.

I was a CouchSurfing addict in Paris I hosted more than 200 people. Now we are less active and don't received so many request but we are still open to host people in Shefford.

Because I like the project... my implication on CouchSurfing
1) Hosting, Surfing &amp; Meeting organization
2) Work to fix the city database
3) I took part in french television report and in documentary. Help to build the CouchSurfing communauty in Paris and France.
3) Attended at the CouchSurfing Collective in Montreal.
4) Was a Global Ambassador

Because I love to host.... CouchSurfing Experience

Who I hosted and where I surfed...

Having a baby and Getting married!!!
Also... paragliding at Chamonix in France... climbing the Machu Picchu in Peru... swimming in the Blue Lagoon in Iceland... and of course beeing a member of CouchSurfing!!!

Teach : Pool, Roller Skating, Actuarial Mathematics... hum, not sure people want to learn the last one!!! ;)

Learn : I want to learn about everything!