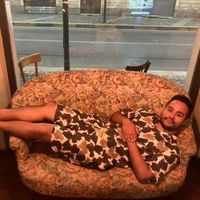 Couchsurfing is not a free hostel, never had bad experiences with my guests cause I chose them in all the requests I received. Work hard if u want to be hosted :)
"Sharing is caring" of course but I'm not your concierge!

I’m working during the week so basically I prefer hosting in the weekend but a good introduction and message could change my mind :)
I’ve a teenager soul in a old body! (I’m joking)

“Just random matter suspended in the dark
I hate to say it, but each other's all we got” - F.J.M.

Learning as most as possible from everyone

Hosting people for me is necessary, I need to know different cultures, I need to feel myself in something bigger than our local world. Is not just an help but sharing a piece of life to grow up together. I'm a simple person but so complex for my simplicity.

"There are no foreign lands. It is the traveler only who is foreign"

"In a house which becomes a home,
one hands down and another takes up
the heritage of mind and heart,
laughter and tears, musings and deeds.
Love, like a carefully loaded ship,
crosses the gulf between the generations.
Therefore, we do not neglect the ceremonies
of our passage: when we wed, when we die,
and when we are blessed with a child;
When we depart and when we return;
When we plant and when we harvest.
Let us bring up our children. It is not
the place of some official to hand to them
their heritage.
If others impart to our children our knowledge
and ideals, they will lose all of us that is
wordless and full of wonder.
Let us build memories in our children,
lest they drag out joyless lives,
lest they allow treasures to be lost because
they have not been given the keys.
We live, not by things, but by the meanings
of things. It is needful to transmit the passwords
from generation to generation"