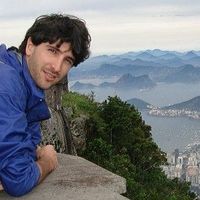 Very open-minded, easy-going... and I don't like personal descriptions :-) You can read what other people said about me or, even better, meet me and discover for yourself! You might find some info about me here: http://ganix.info

- I'm very open-minded.
- I have a bit of a bohemian soul in a scientist mind.
- Nature's amazing. We should all take good care of our environment.
- Carpe diem!
- I don't feel the need for a doctrine to tell us what good or bad is. Empathy, which is kind of my motto, is key for discerning that.

- Some quotes I like:
"Life is not the amount of breaths you take, it's the moments that take your breath away."
"The quieter you become, the more you are able to hear."
"Don't learn to hack. Hack to learn!"
"If I have seen further, it is by standing on the shoulders of giants" (Isaac Newton)
"You take the blue pill and become a proprietary partner, or you take the red pill and embrace the open source."

Countries I surfed in (either couchsurfing or hospitalityclub):
Austria, France, Germany, Greece, Hungary, Ireland, Italy, Poland, Slovenia, Switzerland, United Kingdom...
Check section "Locations traveled" below for the rest of countries I've been to.

- Riding quads (ATVs) in Sharm-el-Sheikh (Egypt), Costa Rica and Bali.
- Paragliding from Izaña (2330m) in the Orotava Valley (Tenerife, Canary Islands).
- Skydiving from about 4000m at -15ºC in Ocaña, Madrid.
- Swimming in the Red Sea with a wild dolphin fed by the locals.
- Forest hiking and eating living termites in Costa Rica!
- Rescuing 5 people at sea, 3 Red Cross members among them, who were supposed to rescue the other 2 people!
- Climbing the Col du Tourmalet by bike when I was 14.
- Visiting all the countries I've been in, each of which had something special.

I can teach music, piano, techy stuff, languages... I am always interested in learning pretty much anything.