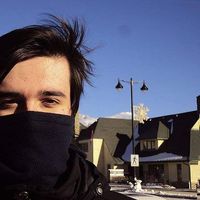 I've hosted people and people have hosted me.

I'd be glad to help you, especially if you're having trouble finding a host.

I like the feeling of being inside a cafe when it's raining. I like when the wind is strong and I can lay back and just be carried forward. I like observing random people for long periods and that makes me a good connoisseur of paths of human interaction. I'm emotionally weak, and easily affected by words and voices and smells.

I'm generally more into grabbing a pint or a glass of wine than into clubbing.

I'm doing a PhD in Philosophy and a B.A. in Art History at the same time. My academic interests revolve around Hegel, phenomenology, inter-subjectivity, the self, aesthetics, music history, philosophy of art. I enjoy reading and discussing sociology, psychology, history, ontology, and so on. I listen to everything existent in the realms of jazz, brazilian popular music, prog rock, afrobeat, and disco. I've written an exercise in philosophy and grammar called "Lili" -- it's about double negatives and someone who likes cinnamon candy. I dream of becoming a magazine editor and I have delayed sleep phase disorder, just so you know.

I live with a cat named Voltaire.

I'll name some five to ten on each topic, just to give some examples of what I usually enjoy:

MUSIC:
I've been delving deep into free and avant-garde jazz lately, especially the 60's Chicago scene (Roscoe Mitchell, Anthony Braxton, The Art Ensemble of Chicago and so on). I'm also a fan of experimentalism in art/concert music, Brazilian folk music and some electronic stuff (Kraftwerk for example).

I'm a terrible teacher, but I know Portuguese and I may try to teach you it. I can explain you how things work (I'm a pro at that), how things came to be what they are, how things think themselves and how norms are generated while people interact.

But seriously, I love discussing politics, philosophy, culture, and so on, especially over a coffee or a beer or some wine.