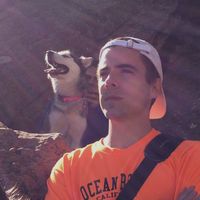 I'm a 35 year old hustling entrepreneur trying to see the world and make a difference in it. Grew up in the suburbs (Connecticut), went to college in the city (Boston), and then escaped to the beach (San Diego) for a few years before taking a break to figure out my next move... which it turned out would be traveling around as a vagabond freelance web developer / entrepreneur / comedian / self-directed learning advocate. My latest passion project is called the Peer Unschooling Network (http://peerunschooling.net) - a digital platform that empowers teens to control their own educational destiny and life! For fun, I like rock climbing, paintings, hiking, surfing, teaching, performance art, writing, and learning new things about the world and universe. I love physics too!

I've been traveling to many different places trying to meet new people and learn more about the world, and in particular, learning about education in different parts of the country. Couchsurfing is a great tool to help me move from place to place and meet new people. As obvious as it is to anyone who is already on Coucshurfing.com, I always feel like I get a better sense for a region when I am spending time with people that live there.

I probably mentioned my interests in other sections. But let's see. I like paintings, rock climbing, stand-up comedy, learning about new technology, making new discoveries about the universe, reading non-fiction, meeting weird people, and yoga.

Movies: I would normally say comedy, but recently I've had a thing for these moves based on historical events. I enjoyed Selma a lot and The Imitation Game. I generally except for war movies, especially if they take place entirely inside of a submarine. And ya, I know I say I dislike war movies but liked Imitation Game, it's a very different kind of war movie to me since it's more based on science geeks than soldiers.

For books, I mostly read nonfiction. Typically the books I read are about physics, spirituality, entrepreneurship, psychology, or history. My favorite recent read is "The Age of Entanglement" - a book written about all the physicists involved in exploring quantum mechanics from about 1900-present. It's particularly cool because it reads like a novel yet all the content in the discussions between the characters is pulled directly from letters and papers the physicists have written. So it's as close to historical fiction as you're going to get.

Leaving this section blank for the rest of my fucking life.

I can perform a stand-up comedy set for you and your friends.
I can build websites.
I'm generally computer-geek-saavy and can fix/solve lots of techy problems.