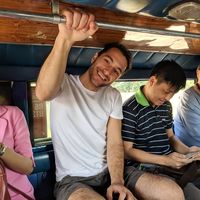 I am originally from many different cities in the west coast of Turkey (moved around roughly 12-14 times?), and I have recently graduated from college in USA. Currently working in Seattle, WA, USA as a software engineer. Some of my interests include literature, cinema, hiking, camping, rock climbing and many more.

I've previously had a radio show during college where we played international songs inviting a student of different cultural background every time. I've hitchhiked and couchsurfed while travelling (also using BeWelcome) and I really enjoy the connection with a host when travelling because that transforms the entire travelling experience. It turns from a simple touristic moment to a visit where one can gain a new friend, a new perspective or wonderful memories.

I was lucky enough to study abroad in Madrid, Spain and did travel as much as I can during my 5 months in Europe. (Only took 2 Spanish classes and 3 dance classes during that semester)

People told me that I am open minded and mature but I can't be the judge of that, I'm sure you can judge yourself :) I would prefer to meet anyone personally and let them decide about me. But I hope my profile and pictures give you an insight haha

I mostly use couchsurfing to meet with new people because as far as my experience goes, many people on couchsurfing are exceptionally interesting and brave enough to get out of their comfort zones.

During my travels, what I have discovered was that I had enjoyed meeting someone local much rather than staying at a hostel/hotel. I do enjoy spending time with my hosts or hangouts in the city or having a evening conversation.

(Oops, I have a bad reference now! Paul was definitely a nice person and we got to spend the whole evening and night after 6pm the first day and the second day we were in by dinner time but we wanted to spend time by the fire while he wanted to spend time by his computer (he is a youtuber :)), I am sad that he felt that we couldn't spend enough time together, I wish he told me earlier. Also, it made me upset that he left a good reference to my female co-surfer whereas a bad reference for me. Please do not hesitate to ask me questions if you'd like!)

Currently I'm spending all my extra time with learning Chinese. I can currently have a conversation with people on apps such as HelloTalk and Tandem with very little help from dictionary :)

I'm also very into photography and short videos recently but I haven't had the opportunity to create something impressive yet.

Books: "Unbearable Lightness of Being by Milan Kundera", "Veronica Wants to Die by Paulo Coelho", "The Trial by Franz Kafka", "Aylak Adam by Yusuf Atilgan" and many more

Rowing in New York and Philadelphia against other universities was incredible. Or rowing during sunrise in a lake in Florida with a fascinating view.

My few nights in Paris with incredibly special people that I have met through CS.

Finding a last minute host in Arch Cape, Oregon and having the most wonderful conversations and a very jinxed day.

Anything Turkish(language/cuisine/cinema/literature), technology. And of course a bit of my stories and life.

I know some Salsa and would LOVE to learn more.

Hopefully some of my time and my perspective on many things that they are passionate about.