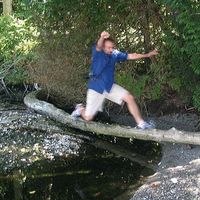 be mindful of my ignorance and willing to explore it

I want my life to be simpler and meaningfull and I am working on it.

There is an old video that I appear with some of my guests at http://www.youtube.com/watch?v=EyAEJOITsGQ !

To be an active citizen is to participate in the social discourse. This requires willingness and ability, both slowly developed wioth experience and an open attitude to life and its complexity.

In order to speak well you first have to learn to listen.

Misunderstandings can be resolved through open communication, open mindedness, respect, compassion and self-knowledge (which to an extend means accepting your weaknesses and overcoming your self-centeredness with self-compassion).

Before the crash (Summer 2006), as the Greek CS ambassador I was regularly greeting new members, especially those in Greece, where, along with other active members, we tried to set up regular meetings. These meetings have been very successful in building up a sense of community for CS members in Athens and lately also in Thessaloniki.

I used to follow CS developments closely with the help of my CS friend Konstantinos (aka Promitheus) but after almost 10 years away I need some time to catch up.

I haven't had a bad experience and most of them (including several dozens of CSers and HCers that I have met in meetings and gatherings)were unforgettable :-)

I have read the sixth book of Harry Potter (The Half-blood Prince) in less than 48 hours (without having read any of the previous ones) while enjoying the great company of several CS members at a great camp at Pilion!

I isolated myself from almost everyone for about 10 months, getting rid of all my personal possesions, as well as 15 kgr. It was a high price to pay for finding myself but it was well worth it (even though I have regretted a few things).

I am interested in all things rhetorical. I can offer suggestions for good books and good practices in learning how to speak in public. Several social sciences and the Humanities are close to my heart too - Political Science, Sociology, Social and Political Theory/Philosophy, cultural criticism, identity studies, discourse theory and analysis :)

I attended a 10day seminar on Vipasana Meditation as taught by S.N.Goenka and his assistats and I am more than willing to share its deep insights and practical advice for an art of life.