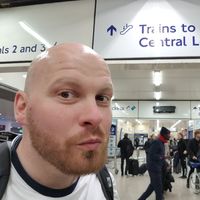 I believe couchsurfing can show the best of people and can have an impact on real lives no matter who, and where you are. There's no limitations when you truly want to help others, and can do so even if it's just a roof over a persons head when called upon.

As for me, I have an immense drive to always better and grow myself in every aspect of life... couchsurfing is one of those ways. I'm also laid back, down to earth, and pretty easy going. I have traveled mostly and literally almost all over Europe (Also to Greenland, Svalbard, and Russia and I'm not done yet!), and I learned of Couchsurfing, I myself didn't give it much thought until on the way home, and I had a bad run in with an Airbnb and a couple hostels in my travels. I love meeting new people, and thought hey! Let's do the CS thing! =)

Treat me with respect, and I will return it to you. This also applies for aspect of both parties mutually completing a reference for one another as well.

While traveling throughout Europe, Hostel's and Hotels were expensive. I know this can be a burden especially when traveling on a budget. I did not learn of Couchsurfing until near the end of my journey on the return. When I did get back home, and after doing research, I felt it was something I wanted to do and contribute to other traveler's and their journey's. So I offer a place for good people and great travelers to stay right in Calgary!

I am extremely passionate about couchsurfing and helping others. I host two monthly events, and I try to contribute heavily to the CS community here in Calgary. I have since started a local hosting network for last minute requests and surfers that are without hosts due to any and all circumstances.

Couchsurfing is not only about providing a safe place for surfers, it's also about cultural exchange and making contributions on the journey's of travelers you're fortunate enough to meet.

Pretty much anything goes.

1st thing... I have traveled through 16 countries in 2013. My travels were vast spanning from Iceland to Russia. Whether it was seeing WWI memorials in NE France, the Eiffel Tower in Paris, the amazing tube system in London, the Alps in Switzerland, tasting the great beer in Belgium, The Heineken Brewery in Amsterdam, the remnants of the Berlin Wall in Germany, the amazing building architecture in Budapest, the beautiful city of Prague, the Red Square in Moscow, Edinburgh Castle in Scotland, or the Guinness Brewery in Dublin, and last but not least Time Square and Rockefeller Center in NYC. It's all been a game changing and life experience.

To be completely honest... My 3rd amazing feat (2018) is that I traveled to Greenland and then to Svalbard within a 7 day period!! 😁

A vast knowledge of traveling, as well as a laid back conversation on a wide range of subjects from just about anything. I also come bearing small gifts. =) I look at such aspects as small cultural contributions.