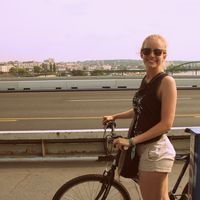 Hi! I'm Michelle, I'm a 23-year-old Dutchie from a small town in the Netherlands. I am currently living in Utrecht (the 4th biggest city in the Netherlands) with my American boyfriend Conor (24). We met in Bordeaux, lived in France and Italy for, and are now settled down in the Netherlands for a bit for work and study. I am starting my Masters in Linguistics with a specialization in Intercultural Communication in September. I am also a freelance copywriter, graphic designer and illustrator. In my free time I love to dance (mainly modern / contemporary), do yoga and try out new recipes.

I like to meet new people and speak different languages . Up until now, I've have tried to do that through Airbnb. However, Airbnb got a bit more commercial and there are fewer people on it who are genuinely interested in spending time with their guests or giving good local tips, so I figured: let's try Couchsurfing!