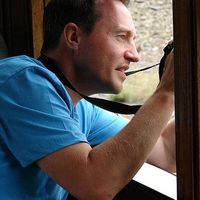 Hello I live in Leuven and work in Brussels, although I often travel for work. I'm single but very social, however also a man of principles, paying a lot of attention to deontology, politeness and above all respect.
I've traveled to a lot of cities worlwide and always thought that it would be a good idea to get in touch with people to get around quicker in a city and see things a tourist would never see.
So I'm motivated in showing people the city of Leuven or beyond (i.e. Belgium). I like cooking, eating and wine and beer degustations ;). And I'm open to philosophical discussions on several topics, as long as I can learn from it or share experiences...
Finally, I have a particular weakness for American culture of the fifties and sixties, and especially for the US cars of that period (and yes have some myself).

I'm new to this, so it's kind of looking around and see what I can do. I like the initiative though and hope to meet and help travelers in Leuven and Belgium as a whole.

Movies, old fifties and sixties cars, traveling, American culture, politics, economics, planes, technology, people, and deeply philosophical discussions in the late hours while having a drink in the dark with just some candles around...

Swim between sharks in the Caribbean area.

Belgian food, showing around, give advice on what to visit