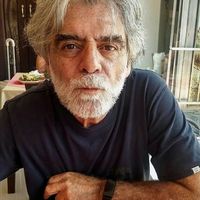 "A good traveler has no fixed plans and is not intent on arriving", Lao Tzu

I love LIFE!I love CS!I love hosting PEOPLE with every fiber of my being. I have more passion than almost anyone you will meet. The only problem that I have with couchsurfing, is that I keep falling in love with other CSurfers. Not in a sexual sort of way, just in a "W W A A A W P" (WOW What An Amazing And Wonderful Person). I want to spend 10 more hours with him/her sort of way. And then, in a day, or a week, they are out of my life BUT FOREVER in MY MIND, in MY SOUL, in MY HEART.

Moved from Taormina (sicily) when i was 18 y old for university in Trento (sociology) and after in Milano where i was living till june 2015
I worked as "Information security manager" in a public company. Now i switched to Marketing Department with the responsability of "Corporate Image &amp; Communication".
I really LOVE to photograph (on my web sites www.effemeridi.it or www.trover.com/u/maurizio there are a lot of photos made by me), to write (some short novels) and to cook.
I love to travel. Since I can't do it as often as I would like it's great to meet travelers in my house and talk and exchange ideas and views on many things!"Hosting" is in my DNA [ I am a South-Italy born man ;-) ] .

ON GAPYEAR FROM JUNE 2015: 6 months in Russia and now traveling in ALL ASIA.

"There is a secret bond between slowness and memory, between speed and forgetting. Consider this utterly commonplace situation: a man is walking down the street. At a certain moment, he tries to recall something, but the recollection escapes him. Automatically, he slows down. Meanwhile, a person who wants to forget a disagreeable incident he has just lived through starts unconsciously to speed up his pace, as if he were trying to distance himself from a thing still too close to him in time.
In existential mathematics, that experience takes the form of two basic equations: the degree of slowness is directly proportional to the intensity of memory; the degree of speed is directly proportional to the intensity of forgetting."
Milan KUNDERA, Slowness

Joined CS in feb 2007 and i am one of the TOP Host in Italy (as you can read in the stastic below) at my home in Milano, in Sicily and, even, in Riga and Saint Peterburg (while i was traveling there).
Country Ambassador for Italy from september 2007 till 15 January 2011 when the "old hierarchic" system was dismissed.
Organized 77 Meetings (mostly in Italy but, also, someone around Europe). Group Moderator in 19 groups with more then 46.800 members. I participate regularly to some meetings around europe and i have a "good" network of CS friend worldwide. I usually spend more then 3 hours/day in CS, and i had a lot of interviews about CS for newspapers and television. http://www.effemeridi.it/CS/Media.htm

I had more than 850 unique guests till now (i didn't count who comes for more than one time) from 85 different countries.

Quite a lot as reading, music, movie, chatting, to know new friends and to met peoples.
My REALLY passion is to photograph (landscape, peoples, and, mostly KIDs) and, after, to write (short novels and Fairy tales) and to cook.

1) I had touched my friend's pregnant belly and "felt" the baby moving inside
2) I spent one night in "lavezzi island" (Sardinia) on sailing boat. I was lay-down in the night on the top of the boat and i saw one thousand million's stars in the sky
3) I heard the "REAL" silence in the sahara desert
4) In Sicily (where i was born) i went to ski on Etna Vulcano and, in the same day, after ski, i went to diving to the sea.

This is the beginnings of the future CouchSurfing University, a school where everyone's a student and everyone's a teacher.

Surfing isn't just be about a place to sleep. It's about exchange. From esoteric knowledge to practical skills, you have special knowledge that others will benefit from knowing. Include one, or even a couple of items here that you might be able to share - and maybe something you want to learn!