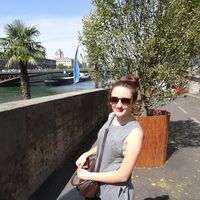 I have been living for 2 ½ years in Zurich and I’m still in a relationship W/ this city! So my address on CS (Würzburg) might be misleading; sporadically I’m there to check on my family and friends as well as enjoying local wine (Please still consider asking for Würzburg - I may make something work!). In Zurich I currently live in a shared flat (without living room) so hosting there is a bit too difficult... also I will be starting my master in political science and data science soon and will be pretty occupied with learning R studio and Python 😬
I LOVE COOKING! Also for you! I enjoy making music, although sometimes university is getting very stressful but I have managed eg to sing in a choir at Opernhaus Zurich. When I’m home, I enjoy playing piano (I have a keyboard but it’s really not the same...) and singing french chansons with my father which he would sing to me as a child...:) As you will see down below, I love learning languages, although I don’t really have a tight learning schedule (I speak German, swissgerman, English, french, a little bit of Italian and can mumble some words in other languages). I’m also half french and my family keeps telling me that my accent allemand est très charmant but at some point in my life (preferably soon) I want to speak accent free - not only french though 😅
I have many Hobbies, which you will kinda see below.
Also, I believe that some day I will be world champion of Sudoku and I’ll be able to live from it :D

get to know other countries &amp; cities just like locals:)
I think it's awesome that you so simply can connect with other people and it might be a better opportunity than staying in a hotel and following a guidebook... Maybe there's a chance that I will keep in touch with the hosts, so they can visit me and I would be able to show them the beauty of my cities :) ( I wrote this when I was 20 but it’s still accurate 😄)

Currently I’m just enjoying that I actually finished my degree... but when I’m in Zurich, I love going to the lake / Limmat with friends and hang out spontaneously. Also, when I buy too much fancy food, I like to share with the people surrounding me and make a special meal :)
Although planned weekly, I do “only” occasionally go hiking. But when I do, I love it. Being on my own, listening to nature or my music and seeing the beautiful nature of Switzerland is one of the best things that ever happened to me!
I found my passion for sudoku again and recently considered buying a microphone to experiment with my voice. I dance in the night to get stress relief but also try to enhance my rapping to boost my confidence :D I quiet enjoy going to the gym but mostly because I look forward to having a gym body someday and also because I think it’s quietly respectable to be able to push 116kg with my feet :D
I love cats and I speak their language (although it isn’t recognised as a proper language 🥲)
Hobbies change so much with moods and seasons because I also hate forcing myself to do something just for the sake of being able to say that I have a constant hobby...

Currently (July 2021) I listen to all kinds of stuff: German/French/ English rap, Jazz (TSF Jazz is my fav radio channel of all times! And if you’re ever in Paris, go to “Le duc des lombards”), French chansons (Jacques Brel, Charles Aznavour, Gilbert Bécaud - I mean kind of obvious with my name😅), Minimal Techno (Joachim Pastor, Worakls, NTO, Amelie Lens .....), Classical music (Especially Max Richter, Alex Desplat and Richard Wagner) and many more genres I could talk (or sing?) to you about.
As I have recently finished my bachelor’s thesis, I didn’t have much time to spend for serious watching of films / series. To get the daily steam of my head, I quiet enjoy watching Hubert &amp; Staller, which is a Bavarian crime comedy series :D
A film, which I watched several times this year and can recommend to EVERYONE is “About time”. Please watch it right now. I love it’s philosophy and you will, too.
Apart from the books I have finished for university, I recently read The violins of Saint Jacques, which was such a picturesque story with many words I haven’t known before 😄 also, I quiet enjoyed reading The spy and the traitor, which inspired me to reconsider my career :D

I went hiking in Grindelwald, Switzerland, pretty much saw nothing on the way up the mountain because of fog, got attacked by sheep which loved my bread, beer, apple juice or gummy bears and were really everything but normal “shy” sheep I have encountered before, had a beer at the mountain lake I wanted to “see” and celebrated that I only saw one meter in front of me, yikes.

I not only love to learn new languages but also to teach them! Working as a nanny and German teacher to a french preschool child taught me a lot (and also what I’ve been missing out when my father rather talked German to me than French 🙃). Also, friends tell me to stop speaking with such a posh British accent but I can’t stop it! I love English!
For sharing, I believe my life has many stories to tell but of course I will not make your ears bleed but rather share my food with you (although maybe not apple juice - sorry it’s my survival drink - probably just like your daily coffee)

my Netflix account :D
My experiences, many bad jokes, a loud laughter, a good beer, wine or gin, experience with wine, pictures from everywhere and bad memes, and I guess, a glance into my “neurodiverse” brain