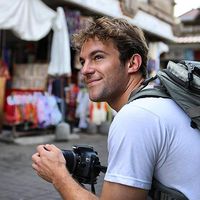 Create a travel TV show that brings the joy of independent travel to my generation (www.youtube.com/vagabrothers)

I try to live my life as if I am the protagonist of some great epic novel. The ending is predetermined so I must cram as much into my short time as possible. My only wish is that my life story turns to be a page-turner!

I studied a lot in university and then immediately after graduation I volunteered at a microfinance NGO in India and realized I was completely ignorant of how the world really worked. The books I'd read in school could not explain the realities I saw in the slums of India. This realization spurred a year of traveling, discovery and adventure and a life-mission of uncovering Truth.

That was in 2008. Since then, I got my start as a travel writer while teaching English in Spain and the Basque Country, eventually self-publishing a travel app called "The Basque Country: Cuisine and Culture" and writing a guidebook to Buenos Aires for OffTrackPlanet.com.

I've worked on ships in the Med, hitchhiked across Europe, got involved in political activism, and worked in independent media in New York before teaming up with my brother Alex to create our travel video project, Vagabrothers.

Last year we won a global travel video making contest called the Biggest, Baddest, Bucket List, which paid us to travel the world for six months making videos about our adventure. Pretty epic!

Now we produce videos for our personal YouTube channel (YouTube.com/vagabrothers) and we're currently based in Los Angeles, CA trying to develop an idea for a travel television show aimed at our generation. In the meantime, we're making short travel videos about the USA and beyond, so hopefully you can be a part of our next adventure!

If one advances confidently in the direction of his dreams, and endeavors to live the life which he has imagined, he will meet with a success unexpected in common hours. He will put some things behind, will pass an invisible boundary; new, universal, and more liberal laws will begin to establish themselves around and within him.

First got started with CS while traveling in Asia and then spent a year hosting people in San Sebastian, Spain. Since then, I've been moving around a lot and haven't had a chance to host for a while. Hoping to get my own place soon.

Lots - All over Western Europe and some places in East Asia. Always open to more experiences...

Riding an old Russian Minsk motorbike across Vietnam in Summer 2009.

Also, I have seen the bodies of all three of the world's embalmed communist leaders...Vladimir Lenin (Moscow), Chairman Mao (Beijing), and Ho Chi Minh (Hanoi)...

I can TEACH English, how to get halfway around the world with little money,

I want to LEARN Castellano, French and Euskera, Spanish guitar and as much about different cultures as possible

I want to SHARE a few days of madness with you.

I've recently found myself deep in the wonderful world of YouTube, so I'm happy to help people find some cool channels that are WAY better than what's on their TV!