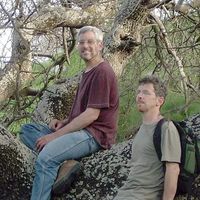 Let come, Live fully, do good , make a living doing things we like.

Ram heard about couchsurfing when travelling in India (Jan 2007). So we joined when He returned, to keep the feel of travelling going, even when wer'e at home... We think CS is a novel idea, a manifestation of the universal basic goodness of people, wherever they be.
We are both rather busy people, so we cant promise you much of our time, but our house is open, and its a lovely place.

The dynamic moment; The Quality of being now (on boundary).

We try to make couchsurfing a better place and better organization, by speaking our mind out about things we care about. (see section "opinion on CS project" below).
As both hosts and guests, We had some wonderful encounters and our world network of friends is growing.

(I think this was in 1979 or 1980). I was hitch-hiking to Stokholm off the ferry near Helsingor, with my friend Roberta. It was a freezing afternoon, and the night was setting in. we had a long way ahead of us...
We got a lift with a couple, who took us to the highway entrance. They offered us to come to their house and spend the night, but we declined. we really wanted to get to Stokholm already. So we stood by the highway entrance, and no one stopped. The sun was setting, it began to drizzel and the wind was freezing. We waited for about half an hour, suddenly, our benefactor appeared again. After dropping his wife at home, he drove back just to make sure we got a lift. He stopped by the curb and said: "get in, its freezing out there, come stay in our home and i'll help you get to Stockholm tomorrow". I was surprised that this man actually returned just to make sure we were well. I asked him why he did it, and he said: "when i was young, i was a sailor, and people were very good to me. I am now returning their favors, I know that when you will have a chance, you too will return my favor to someone else".
when we arrived his wife offered us sweet porridge in clay bowls. Their house was warm and they were so welcoming, we ended up staying with them for two days. Then, through contacts he had at the local airport, he arranged two tickets for us, all the way to Umea (way up north), our final destination.

So be welcome, we now return his favors.

We would like to meet interesting people, to learn and exchange knowledge and make new friendships. we both share an interest in cultures, nature, and that which contains both and defines both - the environment.
Amnon loves walking. Ram prefers wheels: inline skates and bicycles.

Amnon prefers fiction: such as the writing of John Irving, Garcia-Marquez, A.B. Yehoshua.

Love grows. that is amazing. we love each other. That never ceases to amaze me.
We are (if you haven't figured it out yet) a gay couple. we have been together for over 13 years.

Ram can teach how to: light a fire, inline skate backwards, trim a tree, bake bread in the earth, weld, And is always willing to talk about complexity theory, Chaos, and their likes. Amnon just knows everything. Try him.