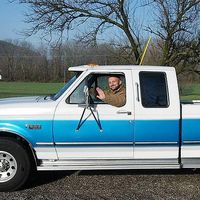 I'm a writer based in Philadelphia, PA. Over the past decade, I've lived in Chicago, Portland, and Fort Lauderdale.

I grew up on a hay farm in central New Jersey in a 300-year-old house. I went to Chicago for college, mainly because I wanted to be in a big city. I moved to Portland because I wanted to be there, and between riding bikes and making coffee, I started volunteering at the best little community radio station in the world.

Well on my way to being radicalized, I snagged a few months' work with the Mercury, a weekly paper. After that, I headed out into the great beyond, crossing the country in a solo road trip that eventually landed me in Fort Lauderdale, Florida. Starting in September 2010 I worked as a staff writer at New Times, and developed a new fondness for air conditioning.

"Sometimes you gotta not look too hard, just let the dog find you."
- Greg Brown

Can cook, fix bicycles, build things... umm.. I can never remember any card games except Durak (which is the best), but I always like to learn... I can tell you more about coffee (esp. espresso) than you ever wanted to know. I have a ton of really esoteric useless knowledge. Let's see what comes up. I can always recommend good things to read (for free, online).