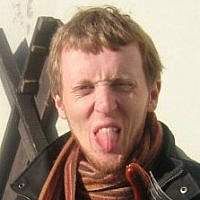 My name is Eysteinn, Im from Iceland. I traveled the world from August 2006 until May 2007. I was furtunate enough to be invited to a few couches, but mostly I used hostels. I liked bouth a lot. Now I live in Reykjavik and maybe in January 2007 I will be able to invite surfers to my couch. Hope to see you then.

I think people are in general good, and have always been good. And will always stay good. It's a question of what the people in charge are going to do. And in general they are also good, and have been and will hopefully always be. But this is all in general, there have also been hasholes in charge.
I like it when things are simple, and globalasiced. But I still like it when there are many countries and don't like it when they try to join in one big mafia. http://steinninn.is/english/re glur.htm

Ive couched about five times, and in August I will be able to host

Auswich, Kenya, got bitten by a dog... in the ass. Found a dead body in Libya. I've done some crazy stuff.