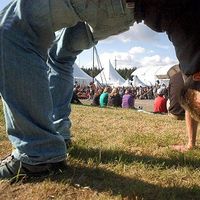 To find out how the story ends.

I'm a senior research fellow at the University of Oxford, in the Oxford Internet Institute. My work is mainly in the area of internet censorship, the online illegal wildlife trade, and in privacy technologies and regulation.

I live in Oxford with my wife, Emily, and my sons Django, Gabriel, Anouar, and Taliesin.

I love games (Go, Chess, Mah Jong, a frightening number of board games. Also capoeira...), but I promise not to try and make you play if you visit. I play banjo and (anglo) concertina. I also occasionally blog about using statistics to investigate the strange and paranormal at weirddatascience.net.

Hosting isn't so much a possibility any more, while four small children run around a fairly small house! When I travel, I generally try to meet people or stay with them, although I usually find it doesn't work for me when I'm at conferences.

In the past, we hosted a few hundred people over the years in York. I was also the CS ambassador for York, although I wasn't as active as I could have been.

My wife, Emily, is on couchsurfing. This profile is all my own.

We've had various people stay, and they've all been great in their different ways.

The only warning that I give is that if you turn up with a computer and it isn't working properly I may not be able to resist the urge to fix it.

I play Go a lot, and a little bit of chess. I'm not particularly good at either of them. I'm always interested in playing, learning or teaching either of them or any other games that you might want to teach or play!(We also have lots of board games, so if you love playing those then we can definitely help you out.)I play Capoeira as many days a week as I can, and love everything to do with it.I love languages. I speak French not too badly, and have a smattering of Chinese (Mandarin) for a few years now. I have a long-standing interest in China, although my knowledge is mainly from reading history books. I also studied Spanish for a year a few years ago, but I'm not very good!

Music:I'm a huge fan of the Kronos Quartet. Lots of world music. Manu Chao, Pink Floyd, Mamer, Hanggai (I have a strange fondness for throat singing), Louis Armstrong, Bartok, Django Reinhardt, Tinariwen, David Bowie, all the music that goes along with Capoeira.

Books: Books are a huge part of my life. The books that are most important to me are "Island" by Aldous Huxley, "Foucault's Pendulum" by Umberto Eco, who's my favourite author of full-length novels, and "The Glass Bead Game" by Herman Hesse.My favourite author of all is Jorge Luis Borges -- I read "The Library of Babel" when I was sixteen, and I haven't recovered yet.

I've never been quite as mouth-open amazed as when I read "Crime and Punishment. Gogol was a recent favourite, and I've been enjoying a lot of Nabokov.

I used to read quite a lot of science fiction. My favourite author there is probably Alastair Reynolds. Kafka, of course. HP Lovecraft can't go without mention. William Gibson has been a huge influence. Iain M. Banks is wonderful.I also read a lot of Chinese history, and I've really enjoyed the "four classic" novels: a Dream of Red Mansions, Warriors of the Marsh, Romance of the Three Kingdoms, and Journey to the West. I also have a soft spot for Robert van Gulik's "Judge Dee" stories.

For overall experience, it would have to be going to the Festival au Desert in Mali. Two hours outside of Timbuktu in the desert for a festival of music from all over the world.

For the single experience, it would be sitting astride of a massive sand dune in the Northern Sahara (Merzourga, Morocco) at night with the sand warm underneath me and the dunes stretching as far as I could see in every direction.

The moment in capoeira where you lose yourself completely in the game.

I'll teach you anything I know! Some capoeira, how to play Go and some basic Chinese.

I'd love to learn more Chinese, and I'm always interested to talk to people who know about Chinese history or culture.