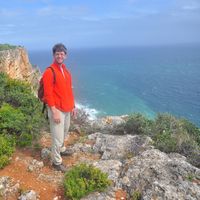 educating people about the useful properties of buckwheat

two wheels, spokes, saddle, handlebar, baggage rack, sometimes punctured tyres. I almost forgot - I always have a spare tube!
In short I am a pretty ordinary rusty piece of machinery, but sometimes I surprise even myself.

Check my website for photographs of some of the best places I have seen, if you can read Russian - you can read the travelogues.

current mood- Dont you know we are riding on the Marrakesh express, All aboard that train....(from a song)
а вооб

hosting those who ask for a couch, when my couch is available and when I am around

It is getting more and more difficult to surf people\s couches. I can tell you that. In the CS hubs out of 20 Definitely hosting, 50 percent definitely say no and maybe one says it is OK for a day. Good thing people reply.

Drinking tea at the porch in the old summer house

THe music of the old couch is particularly attractive. I also like the music of the wheels of the train going home.
the sound of avalanches far away, darbuka+tabla jamming.

other good books - Ballard, Russian literature of all times.

amazing things seen - Snowdrifts in Africa(Mokhotlong, Lesotho)) a black bear from a train in British Columbia.
a. thing done - been born in Russia
amazing sounds heard - hyenas howling outside my tent in Damaraland.
One amazing thing which happened to me is almost being shot dead from a rifle in Tuva Republic. And having a night visit of a brown bear on Sakhalin island (the tent smelled of foul fish and so the big guy got attracted). I still think - maybe it was a cow?

I have got a bike. You can ride it if you like.
It's got a basket. A bell that rings
And things to make it look good
I'd give it to you if I could
But I borrowed it