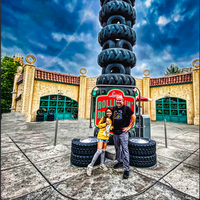 No mission. Just acceptance. What it is, what it was, and what it shall be.

I'm a OG geek. My first video game was Pong, my first game system was a Commodore 64. I learned to program in Basic. I started playing D and D when I was 10 back in 1981 (I am the elf with all the magic flasks!). I'm the founder of a startup and when my startup is a full blown success, I will again be the founder of a startup. I have a 10-year old daughter who I am helping to embrace geek passions. I love travel, open borders, and open arms. I love the ocean, cooking, laughter, and singing when no one is listening.

You can read my latest adventures and find my books at my blog at http://www.vagobond.com

Do whatever you want, as long as it causes no harm to others. Individual freedom extends as far as the next individual.

I've been hosting couch surfers and being hosted for most of my life. Before couchsurfing.com, it was with friends of friends. Since joining couch surfing, I've loved hosting, surfing, and meeting new couch surfing friends everywhere I go.

water, bicycles, books, writing, buddhism, politics, art, architecture, folk medicine, music, language, and nearly everything else under the sun...or beyond it.

I founded a religion called Bald Jesusism. The only hard rule is 'Don't be a dick' and you get to decide what that means.

Taking the time to learn about credit cards, mileage points, and the value of a good credit score in our insane society was a good decision - even though I would prefer we lived in a society where all those things were completely unnecessary.

I have some good stories and a warm personality. I've almost always arrived at a host's place and then left a friend's place.