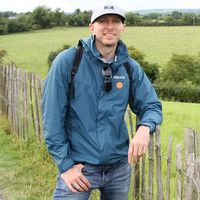 To experience the world and everything it has to offer.

I'm born and raised in Las Vegas but I love to get out and see the world. If I could travel everyday of the rest of my life, I would be happy. I love seeing new things and meeting new people. I love movies, music, theater and anything related to the arts. I love good conversation over good food with good people.

One life. Live it.

I surf and host as often as possible!

I have hosted people from all over the world. I've also surfed couches in many countries. I've had fantastic experiences with couchsurfing and have made many new friends along the way!

I've watched the sun rise over the Atlantic Ocean and set over the Pacific. I've jumped out of a plane, jumped off a bungee platform, and I'd jump at the chance to do them both again. I've seen Machu Picchu, the Great Barrier Reef, the Roman Coliseum, the Acropolis in Greece, the Pyramids of Egypt, and the Moai of Easter Island. I’ve camped in the middle of the Serengeti and I’ve hiked the Grand Canyon Rim to Rim (and back again). I've spent endless hours enjoying the company of my friends and even more hours enjoying the company of complete strangers. I've seen beautiful beaches, experienced amazing sites, and met incredible people...and I hope this is just the beginning.