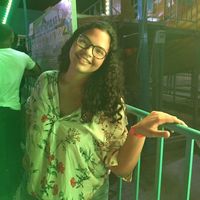 I am from a Caribbean island called Aruba, in Aruba most of the inhabitants speak four languages, which are Dutch, Spanish, English and our native language of Papiamento. We speak Dutch because we are a part of the Dutch kingdom.

Last year for my Erasmus I was based in Belgium for 5 months! I took this opportunity to see as much of Europe as I could. I managed to travel to 10 countries during this trip. Most of which was solo travel!

Now I am back in the Caribbean and will visit countries in South America! My first stop is Colombia for three weeks in July.

I joined couchsurfing when I booked my first trip alone, just to see if it was a possibility for me. Later I hosted a guest, and now I just keep tabs with the couch surfing community

I love classic 90s films, such as: seven, fight club, the silence of the lambs, forest gump, the sixth sense and I could go on forever.

As for music I can listen to anything but I have a knack for indie sounds.

Made it to a flight after having missed the bus to the airport, then hitching a ride with a friend from another city (who miraculously had an off day and was awake at 5 am) then going through check-in, security checks, and endless gates with literally 8 minutes to spare. Couldn't believe I got on the flight.

I can teach you a little bit of my native language of Papiamento! I could cook something Caribbean for you!