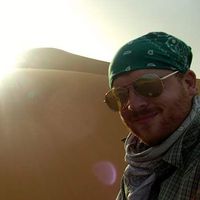 My name is Nick and my wife Bonnie and I moved to Minneapolis about eight months ago. We are not hosting right now but if you want to meet up for coffee and a donut and swap travel stories let us know. I've been on CS over ten years but have been fairly inactive the past couple of years. I'm a pretty introverted guy but can be very social as well. I like to joke around and be goofy and not take life too seriously. Some people give me a hard time because I am not on facebook, don't have cable, and don't have a smart phone but I am quite happy without those things. I like watching movies, listening to music, playing drums, cooking, riding my bike, and watching football (soccer) matches.

Couchsurfing is a fantastic way to meet other people, learn about other cultures, learn about yourself, and expand your comfort zone. I have surfed and met up with surfers in the United States, Canada, France, Switzerland, Spain, Germany, Netherlands, Morocco, Malaysia, Australia, and Thailand. I also hosted surfers from all over the world when I lived in Memphis. They have all been incredible experiences- each unique, educational, and enjoyable and I imagine there are many more to come.

I guess I'll take this section to briefly talk about food. I'll try most anything but do have my preferences. I think when you travel you can get spoiled with food because you're getting the local flavors. Personal highlights include baingan bharta in Delhi, pad thai in Lopburi, bbq shrimp from Pascal Manale's in New Orleans, One &amp; Only in Memphis, gelato in Rome, springbok stew in Namibia, steak at Las Lilas in Buenos Aires. The list could go on and on. I am a sucker for Kit Kats though and when in Australia Tim Tams :-)

I'm a music guy. I make soundtracks for places I've lived and traveled. It's my way of keeping a journal. Who do I like? I grew up on Zeppelin, Floyd, Grateful Dead, The Beatles, U2, Neil Young, Bob Dylan, and The Allman Brothers. That music lives in my soul. Lately I've also been diggin' Ryan Adams, Conor Oberst, Belle &amp; Sebastian, Son Volt, Wilco, Phish, Gov't Mule, Tedeschi/Trucks, and many others. I am a fan of jazz and classical music as well.

Books: I like to read biographies and travel/adventure stories. I liked trading books with people while traveling, that was a good way to discover new authors. I like Ed Abbey and Bill Bryson. Chronicles Volume 1 by Bob Dylan was amazing. I'm also a big fan of the Harry Potter books. I think I may read them again.

I like to watch movies. A few favorites are Breaking Away, Big Fish, The Big Lebowski, Almost Famous, For Love of The Game, Garden State, My Blueberry Nights, The Godfather, Harry Potter, and many more.

TV Shows? How I Met Your Mother, Californication, The Office, West Wing.

I married my favorite person and we traveled around the world together.

After a year on the road, meeting up with my good friends in Haarlem, Netherlands was pretty amazing.

Hiking to the bottom and then back to the top of the Grand Canyon in one day made me feel like a rock star.

The Namib desert is one of the most magical places on earth.

Once in a while you get shown the light in the strangest of places if you look at it right.

Miracles happen everyday... sometimes we get to be a part of them.

Set the gear shift for the high gear of your soul, you've gotta run like an antelope out of control.

When the power of love overcomes the love of power the world will know peace.

The world is a book and those who do not travel read only a page.