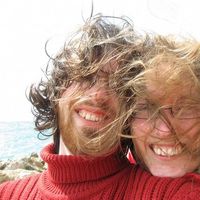 "infinities are weired, they are somehow counter-intuitive" (C.Knapp)

We're food addicts with some pref for good music, math, geek stuff and are living together (Moritz and Angela) in the 7th district of Vienna. The food we either prep ourselves or go out in one of the nice restaurants in Vienna.
traveling and working in an international organization brought us in contact with different cultures, and each of them is a fascinating new world. this is the path, that we are on right now, filled with some math, computers and foooood.

So far, we mainly hosted folks and visited some of our guests at their place. Having someone over at our place is like a little holiday at home. Hangin' out with the Vienna group corwd made Moe current Tiramisu-King, but this battle isn't over yet.
====
The trip to Turkey in September 2008 would not have been the same without meeting all those lovely surfers. In addition to the common hospitality, all of them added a little bit of spice, water or love to our time!
====
Moe had a great time in Ismaning, Munich surfing with CLO_FAB. Gettin' on the other side from time to time, gives you a good idea, how (great) it is to be hosted.

cooking good food, hang out with friends, playing boards games, good music, taekwondo (http://www.taekwondowien.at ), going to the cinema, good wine (can tell you a litte bit about austrian one and would like to learn much more about the rest of the world), smoking some hooka / shisha, growing vegetables in the city

movies:
just got started on classical movies like Casablanca or Citizen Kane, Singin' in the rain, African movies (you really get a different picture of that continent!) like http://en.wikipedia.org/wiki/Moolaad%C3%A9
in general non-Hollywood-non-mainstream-productions, movies by tarantino, pedro almodovar, but also sergio leone (the good, the bad and the ugly) wua-wua-wuauun, Sergio Sollima and the third Sergio (what was his name again, whatever, another Italian guy who made western movies with a strong political background in the sixities) - great soundtracks btw.
see most stanley kubrik movies, and lovin' all of them.

We have pretty good knowledge of food and cooking, so thats an area to teach and learn something at the same time.
Cooking Austrian without carbonhydrates is a challenge, we still pick up, and the tofu Tiramisu, well, was next, but after finding out what silk tofu is: this would just be gross.

On CS itself, consider the following:

When you do a CouchSearch for Vienna, choose "Advanced Search" (on the "CouchSearch!" page on top in the middle or here: http://www.couchsurfing.com/mapsurf.html?form=advanced ...), fill in all the fields as you wish but then for "Order by" choose "Newest Accounts" so that you can contact new members. They are (obviously!) less experienced and therefore often only show up on the bottom of a CouchSearch result list that is sorted in the standard order. In a place with as many CouchSurfers as Vienna you usually don't scroll down the list to find them there - so these new CouchSurfers don't get "too many" CouchRequests although often they might be especially keen on starting to host and thus be an active part of our community. So if you request their couch your chances might be much better to find a host who really wants to host;-)
However: being new these CouchSurfers also often lack references and other stuff that would give you (at least a sense of) safety - so you might wanna limit your choice by choosing "+2" or "+3" for "Verification Level" (pretty high up on the "CouchSearch!" page).
If you wanna start discussion on any else, feel free to start with us, too!