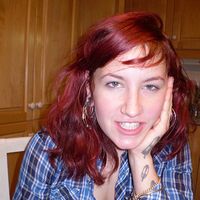 "babes only" apply. thank you.

I'm a bike messenger, an amateur cartoonist and a hustler. I'm into cults, violence and mass murderers, bloody suicides and Indian food. I'm scared of civilization and where it's going so one day I'm planning to get a land and a bunch of guns and dogs and to challenge the Canadian Government to a duel. until then, I drink 2 liters of green tea a day, fix my bikes, make voodoo dolls and make ink drawings. did I mention I draw comics? www.myspace.com/powwowcomix

"punch somebody in the face and might try to punch you back, you may then pull your knife out and stab 'em."

I've been travelling since I was a teenager, mostly good experiences but there's always sleazebags out there.
back in 2001 when I hit the road, there was no Internet-dating-couchsurfing type of thing, you met people in real circumstances. I was more of a lifestyle traveller, so to me going to places didn't mean being on vacation. I've stayed in lots of scummy squats, hippie farms, under bridges, by riverbeds, next to highways, on beaches, etc. Maybe the fact that I've travelled for so long will make me a better host. Maybe not.

I'm into various things like punk rock culture, printmaking, zine making, leatherwork, having a new shitty band every month, paper-mâché sculpture making, sewing, partying, working hard for a few months then not working for the rest of the year, making and looking at art, my real good friends, comic books and simple unmaterialistic living.

Books:Any good graphic novel, comic book or weird graphic design book I can get my hand on. biographies.

I got beat up by some jocks in france