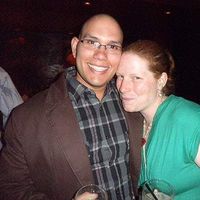 We were married in October 2006, and then left the country in February 2007 to serve in the United States Peace Corps (and where we learned about CouchSurfing). We spent 2 1/2 years in Romania working and living in the small town of Drobeta Turnu Severin. After our service, we traveled for 2 months through Europe to see the sights before heading back home. We're now living in Seattle, WA with our little dog Leia.

Heather has visited Mexico, Canada and many parts of the United States. Justin has traveled to China, Mexico and around the U.S. We've couchsurfed through more than 13 different countries on three different continents! We're an easy going couple who are interested in unique experiences and exploring different places. We feel there's no better way to do this than staying with people all over the world!

Back in Romania we hosted some absolutely WONDERFUL people &amp; we had an awesome time playing the surfer. It's been amazing to make connections from so many different places with so man amazing human beings. There are tons of great people out there &amp; you can really get to know them well by sharing food and comfort. We've surfed, and we've hosted, so we understand both sides of the experience!

BOOKS:
Siddartha by Herman Hesse
The Alchemist by Paulo Coelho
Fight Club by Chuck Palahniuk
Way of the Peaceful Warrior by Dan Millman
The Tao of Pooh by Benjamin Hoff
Dune by Frank Herbert
A Brave New World by Aldous Huxley
The Plague by Albert Camus
The Hitchhikers Guide to the Galaxy by Douglas Adams
Tales of the Cuthulu Mythos by H.P. Lovecraft
The Chronicles of Narnia by C.S. Lewis
Lord of the Rings by J.R.R. Tolkein
I, Robot by Issac Asimov
The Dark Tower by Stephen King
Catch 22 by Joseph Heller
The Gate to Women's Country by Sheri S. Tepper
1984 by George Orwell
Oryx &amp; Crake by Margaret Atwood
Enders Game by Orson Scott Card
East Of Eden by John Steinbeck
The Great Gadspy by F. Scott Fitzgerald

Competed in the Carpathian Adventure race (160km).
Climbed on the pyramids of the Yucatan peninsula.
Walked on the Great Wall of China.
Protected sea turtles off the Georgian coast.
Built houses in Mexico and the U.S.A.
Joined the Peace Corps.
Studied in the Shaolin monastery in China.
Climbed Angel's Landing in Zion National Park.
Survived grad school in the wake of Hurricane Katrina
HAD A BABY!!!

WHAT WE WANT TO LEARN: Anything about the human experience!

WHAT WE WANT TO SHARE: laughter, tears, friendship, covenant

Stories of living abroad, southwestern cooking, skills picked up along the way