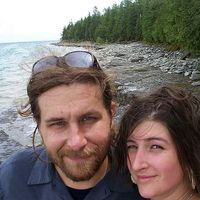 I am awesome. Bradley is too. we have three, awesome cats, if you have a cat allergy this is not the couch for you.

I was (very) un-traditionally, home un-schooled we called it.
My brother and I spent our days playing in the woods, inventing games, playing sports...etc
Our parents encouraged us in any endeavor we found of interest.
I wouldn't change my upbringing for anything.

I love to play games, card, board, whatever, I'll totally play a game with you.

I worked at Bell's Brewery for 4 great years until they made some bad decisions and I decided to pursue some kitchen management opportunities elsewhere for several years. Now I work for myself, doing art/craft shows, making stuff and selling stuff!
https://www.facebook.com/MouthyMonsters

Author of note:
Roald Dahl (I found out I had been pronouncing this incorrectly my whole life, it's "ROO-all").

Rock climbing with the New Zealand army trainees who picked me up (hitching), let me stay at their leave center and took me out on the town, yea New Zealand!

I was in Chile during the huge earthquake (in Constitución), I was farther south but it was intense enough there, the sensation of the ground under your feet moving like waves and watching everything sway was unreal.