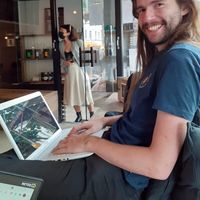 I'm trying to embrace life's uncertainties. Two years ago I went to Texas in the middle of Covid thinking I would do stand up there for a while, and I left a few weeks later to spend two and a half months in Mexico. After some aimless traveling and some stints back home, I now somehow moved to Padua, Italy to follow my girlfriend who's studying there. I feel that I'm in a big personal transition, and it's both exciting and somewhat scary. Wu Wei, I guess?
________

I used to be very bad at socializing, maybe because I stopped school at 13, but now I love meeting new people and I realize the fundamental importance of a social life.

I do stand up and I'm a comedy writer. Some of it is for a French humor publication, but most of it is freelancing for different companies (funny copywriting and that kind of stuff).
I also dabble in erotica, and now I think I'm trying my hand at being an entrepreneur or something?

I'm sort of in a perpetual conflict with myself but I feel like I've become better at handling my mind. I want to be serious about my career but also focus on new experiences without knowing exactly what's going to happen. I'm trying to somehow combine both. I also realize more and more the importance of people, friendships and family. Once in a while it reassures me to remember that, ultimately, it's the most important thing.

I'm big on self-improvement (or at least the idea of it!), whether it's about becoming a better person, a more fulfilled individual, or getting better at my craft(s). But I'm also realizing that the perpetual desire for self-improvement can be a source of suffering. You should know why you want what you want, and if that's what you really need. That shit is really confusing.

Initially, I signed up because I was having trouble finding accomodation that allowed underage travelers when I went to NYC at 16. Didn't end up surfing but the website really helped me become more social when I was around 17. And then I had some of the best experiences using couchsurfing while traveling.
I couchsurfed in a bunch of places, mostly Northern Europe and North America but also Iran.
I hosted a small number of people while living in Montreal and I loved it!

Non-fiction books about a variety of things. Podcasts. Trying new things. Side hustles.

I enjoy long talks about everything as well as personal talks that you feel like you're not supposed to be having with someone you've just met and yet you are.

Busking with my ukulele in Teheran
Taking the night train between Saint-Petersburg and Moscow
Seeing absolutely no light while camping out near the beach in Big Sur
Attending the coolest book fair in France as a co-author
Living in Edinburg for less than three months and failing to find a job
Moving to Canada, slowly realizing I shouldn't be with my girlfriend anymore, and growing so much in just a few months
Volunteering at the Just for Laughs festival
Hitchhiking across Canada from Saguenay to Vancouver
Skinny-dipping in a cenote in the Mexican jungle
Experiencing true friendship
Romantic love
Overnight trains in Kazakhstan

Whoopsies, this says "one thing", it was supposed to be an exercise in pithiness, oh no.

I don't know much, guys. Seriously, I sometimes get scared at the fact that I have almost no skills. I play a tiny bit of the ukulele. I spoke Dutch as a kid and forgot most of it. That being said, I'm in the process changing that and I look forward to seeing what life will bring me :)

I want to learn more around creativity, languages, and anything else really. I'd like to be more of a generalist and learn different sets of skills. There's an amazing book about the benefits of this, called 'Range: Why Generalists Triumph in a Specialized World'.

I like to cook although I doubt I'm particularly good at it; I make scrambled eggs with avocado and stuff like that.
And I guess I can sort of remember how to make a mug cake?