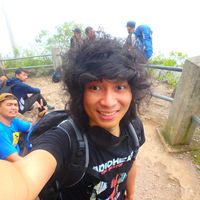 💥 Visit all countries in Europe and be in Greenland before I turn 30.

Indonesian from the island of Java, currently filling the shortage of JavaScript programmers in Germany.

Excerpt from my best friend:
“Glenn would always want to jump over the cliff. He may have said that to me: 'If you're faced with a cliff, have you ever thought of jumpin'?' I said, 'Fuck off, Glenn. You jump, and tell me how it is.' That was basically the difference in our personalities.”

It's easier to go down a hill than up it but the view is much better at the top.

Love people, use things—because the opposite never works.

There are only two things my mom has always said: Drink your milk every day and participate in Couchsurfing!

🎼 The Beatles, Nirvana, Counting Crows, Sigur Rós, Led Zeppelin, Pink Floyd, Aerosmith, Joe Satriani, Green Day, Radiohead, R.E.M., U2, Coldplay, The Temper Trap, etc., and so on, and so forth.

📚 The Alchemist, The Curious Incident of the Dog in the Night-Time, The Catcher in the Rye, Sophie's world, The Five People You Meet in Heaven, etc., and so on, and so forth.

Sat on the top of the hill in the city of Ví­k, Iceland, with only ten other hikers, and watched the puffin birds flying around my head and flapping their little wings.

Other than that: Got my master degree in Germany by not attending most of the classes (and only sitting for the final exams), and wrote the thesis in a month. Seriously! :))

I can teach you ballet and chicken dance. No, just kidding :D