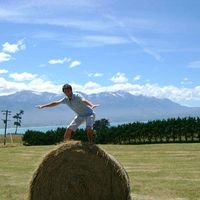 Take life as it comes... and try to be happy with it!

I'm an italian student and I have a Master degree in Cinematography, events organisation &amp; production but after the NZ experience I've decided to work as chef coz it's a job that allows traveling abroad and after all I have a real passion for nice food. I always like talking about cinema, music and art as well... Background culture is really important if u want to open more ways in your life.
People say that I'm a good guy, funny and crazy most of the time (but too busy), even if at a first glance anybody would say so...
I love meeting new people and learn new things.

- Offering a place to stay, if possible;
- Helping as much as I can;

2010 ~~Since I've started seasonal job I have no more time to host and travel really. I've to Japan twice but couldn't meet any CS there, even though I got some nice tips from some of them.

2009 ~~I've been traveling and working around NZ most of the time. Together with my ocusin for the South Island trip we had a chance to meet some very nice CSrs.

December 2008
~~Joined a couple CS mettings in Wellington, NZ. Fantastic experience with people from all over the world =)!

October-November 2008
~~Surfed many couchs in Istanbul. Finally met Ufkum, I was with Pinar and Zeynep again, met a lot of CSrs from Istanbul (Gulsah, Halim, Faruk, Hüma) and from all over the world (Jean, Katharina, ...)!

I like very much Cinema, Music and Arts and I'd never stop to learn new things...
I have a real passion for food and cooking. If I can't bring any little present for u, then u should let me cook something instead ;)

Uff!.. too many to say in a few lines... let's say all the good stuff that can makes my existence better.

Life is pretty amazing by itself but... rafting in Canada, skydiving in Queenstown (NZ) and Ultimate frisbee were things I enjoyed very much.

I have been a cook in a local restaurant for many years... and I still like to cook. That's what drove me to choose a seasonal chef job.
I occasionally write for some magazines about films and events.
I like photography and videomaking: I've worked as a video editor on a "web tv" station. It was a pretty good experience even if I don't like tv very much.
I play guitar. I'm principally a self-taught player, but I've also studied rock and jazz for a few years.
I like to learn and talk new languages. Japanese is my challenge right now!
I love any kind of sport. Soccer is probably the one I still play with a kind of assiduity, but I also like swimming, bike rides, hiking, volley and whatever!
Last but not least... I'm a Mac user =)