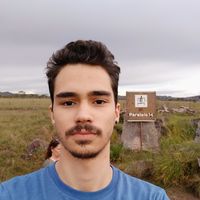 Hello! I'm a student at Universidade de Brasília, I love cooking, going out, playing games and drinking with friends.

In 2019 I became vegan and since then I've been very interested in cooking, specially plant-based version of typical brazilian dishes from all regions of the country.

I love talking about sustainability (yes, I usually wash all my garbage and throw them away separately xD), animal and human rights but as an engineering student I'm also very interested in robotics and automation, like programming microcontrollers, 3D printing and control theory.

Besides all the eco-boring and nerdy stuff I also love drinking and going out to pubs and night clubs, specially if they play brazilian funk or pop music. I am a TOTAL fan of going to concerts and music festivals, I miss them so much!

I am fully vaccinated with the Janssen's single dose vaccine!

I love cultural exchange! Specially when it comes to language and food. I've been learning more about my country in the past few years (as it's a very big and diverse country) and I'm eager to learn about other people's country too.

According to Spotify, my top 10 most listened artists are, in this order:
Lana del Rey, Lady Gaga, Carne Doce, Arctic Monkeys, Beirut, The Strokes, Linn da Quebrada, The Smiths, Baleia and Alt-J.

Does getting ran over by a car 3 times counts?

Experiences! I can also cook and would be very pleased to cook a brazilian dish for you, if that's possible. I just don't cook anything with animals or anything that comes from them, but It's totally fine if you're not vegan.
I can also help with any domestic work you need, with a good conversation or good music there aren't big enough dishes to clean.