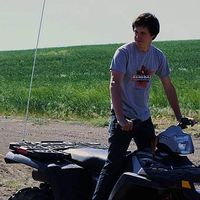 I avidly seek new places to go and experiences to immerse myself in.
I love traveling, but I travel to meet people and experience cultures... sightseeing is not as attractive to me. I am very laid back, and I often drift into whatever situation I end up in.

I have met a few people and surfed a couple times and I've loved it!

Experiencing as much as I can about the world.

The Departed, Zoolander, Away We Go, Dead Snow, Grand Budapest Hotel, The Prestige

All The King's Men, Slaughterhouse-Five, Notes From Underground, The Little Prince, Discworld

Flying an airplane alone through the Cascade Mountains in the Northwestern United States was a transcendental experience for me. It is truly humbling when a person is able to feel their own smallness in comparison to the vastness of the world around them.